Dilmaya and I spent two days in Archalbot, helping with the earthbag house and talking with members of the community about the upcoming week of building. The plan is for the whole group to take a one day gap on Monday to build the bamboo shelter for family living under the tarp. A lot of our time went in to talking with that family, especially with the son, Uttam.

Uttam is 21 years old and he’s the first person in his family to get an education. He stayed in school until sixth grade; his two older brothers didn’t go to school at all. But his younger sister got through eighth grade, and his youngest brother is currently in tenth grade. If the younger brother passes his school leaving exams, he’ll be the very first person in Uttam’s family to graduate from high school.

As a teenager, Uttam got a job in Dubai through a labor company, where he earned $200 a month. He 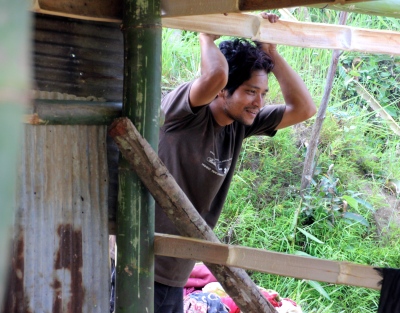 eventually learned to drive a bulldozer there – a fairly lucrative skill – but the company never raised his salary. In Nepal, he can’t drive a bulldozer without a license, and he says it costs a lot of money to obtain a license. So for now he’s got a job working in Chitwan.

Uttam and his wife met over the phone. Love marriage. Their baby is two months old and his wife is seventeen.

I wanted to take some time to appreciate Uttam’s situation from his point of view. It was frustrating for Dilmaya and me, as well as for the other neighbors, to have to work so hard to motivate his family to go gather bamboo for us to help them make a decent shelter. “It’s so hard to make them understand,” the neighbors kept saying with mild distain. And certainly enough, any time we discussed the plan with them, they seemed distrustful and obstinate. The truth is that if it hadn’t been for the baby and the insanity of their current living situation, it would have seemed like a poor use of our time, given how many people need help.

But what I began to realize as I talked with Uttam was that he didn’t believe anyone was really going to show up and help them build. The bamboo actually costs money because it’s on someone else’s land, and even if they arranged a barter instead of payment, Uttam’s family didn’t have any reason to believe anyone was going to reward their investment.

The more I talked with Uttam, I began to see the bias of the outside world, whose border was no further away than the border of the family. Uttam is facing tremendous odds. The fact that he can read is progressive in his context. He has traveled to Dubai and Chitwan for work and learned to operate a bulldozer. Bootstrapping has never meant trusting anything. It has meant knowing nothing is on your side, grabbing the closest rung on the ladder with a free hand, but never moving your feet off the rung you’re on when there’s no assurance the next one isn’t rot. Of course it is hard for Uttam and his family to “understand.” What he understands is the reality he is in, not the one someone else is telling him is possible.

The truth is that, they have largely adjusted to seeming like a poor use of someone’s time.

Dilmaya and I were standing with Uttam outside his tarp tent at dusk, after a day of failed attempts at bamboo collection. They have almost fifteen people living in here. It was unclear to us how hard they were really trying. To some extent, maybe landowners were giving them a hard time about accessing the bamboo; on the other hand, maybe their efforts were half-hearted. We had no way of knowing.

“Well,” I said, “I can tell you one thing. If you don’t cut any bamboo and clear out this tarp thing, you can be sure nobody is going to come here and help you build on Monday.”

He looked at me with the squinty smile, like, “You’re funny. Fair point.”

As Dilmaya and I were leaving Sunday morning, Uttam’s relatives stopped by.

They were headed out with a sickle and tape measure. 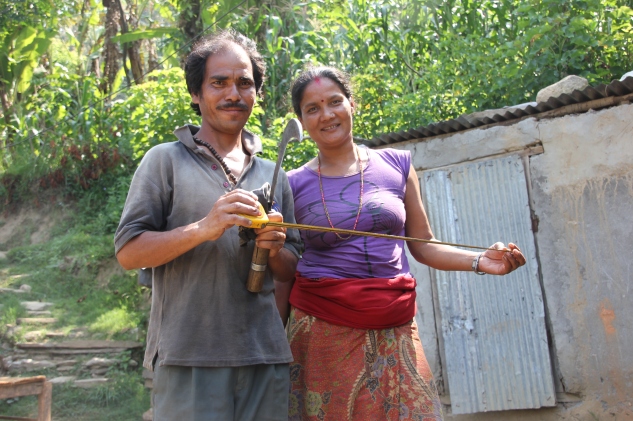