A few weeks ago, I was sitting in a coffee shop in Lakeside, and overheard a woman at another table on the phone, trying to figure out how to help a village in Dhading. When she hung up she was frustrated and kind of flustered. We got to talking, and it turned out her name is Janet, she’s from Taiwan, and she has a friend named Bishnu in this village in Dhading, Tripureswor, Ward #6.  She explained all the ways she’d been trying, unsuccessfully to help Bishnu’s village.

I don’t know why, but after asking her a few questions, I told her I’d try to figure out what was going on in Tripureswor, Ward #6. Dhading is a few districts over from Pokhara, quite far from us, but I’ve learned enough about the system now that I figured I could at least make a few calls and get more information for Janet.

I made some early phone calls a few weeks ago and confirmed, to my surprise, that Janet was correct in thinking that so far Oxfam had only provided 2 bags of rice, hygiene kits, and 20 kg of rice seed to residents of Tripureswor. Any other work there had been done by small, private groups.  I learned that out of 947 households in Tripureswor Village, 924 had been destroyed or damaged.  Fifteen people died.

I never actually saw Janet again in person, although I called to tell her what I’d found out, and she left to return to Taiwan a few weeks later, and recently 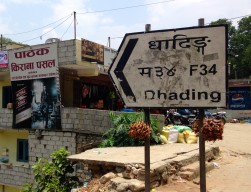 sent me a disappointed email saying she’d never been able to get anything together to help Bishnu’s village. One organization after another had either refused to help, or said they’d help and then backed out.

But Tripureswor Ward #6 has stayed in my mind. Since Lamjung is one district in the right direction and we were going there on Thursday and Friday to deliver tin, I called Janet’s friend Bishnu on Wednesday and introduced myself. On Saturday morning, Dilmaya and I decided to keep going on from Lamjung to Dhading.

Additionally, my good friend Anne has just arrived from the U.S. Anne and I met in the one Nepali class I’ve ever taken, during the summer of 2006 at Cornell. We are a great pair because she can read Sanskrit and speak royal Nepali, and I can’t read at all but I can talk with animals; she did her PhD and wrote a book on modern politics and public ritual in Nepal, making her an expert in local history and religion, and I am the world’s leading expert in carrying things on my head with village wives and cracking jokes in my rural accent. Between the two of us there’s pretty much no situation that we don’t have covered.

So on Saturday morning, Dilmaya and I took a bus east from Lamjung and Anne took a bus west from Kathmandu, and we met by the highway in Malekhu. And from there: to Dhading.

This is now the part of the story about a very, very long muddy road.  The second and main part of the journey, a few dozen kilometers from Dhading Besi to Khahare, took us five hours.

We passed this jam,

…let’s just zoom in on that grandma on the back of the motorbike with the goat. 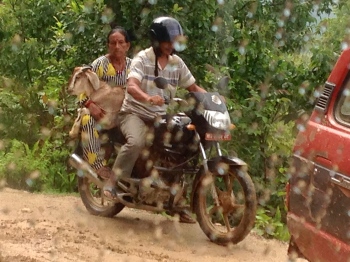 Inevitably, the bus gets stuck, because someone had decided that morning that it was a good idea to use a bulldozer to churn up the dirt on this road to improve it.  During the monsoon.

We sit in the bus for a long time, it is raining, I have no idea where we are, I play some Amy Winehouse on my phone and entertain everyone with my village accent. Eventually we get out of the bus and we start walking. We passed some people standing near the bus clucking their tongues, saying, “The dozer had just dug up this road and made it so nice and flat. And then just like that the rain came.”

I just want to use this opportunity to make a public service announcement: IT’S MONSOON SEASON, PEOPLE.  The rainy season.

Now that we were all used to the idea that we would not be arriving in Tripureswor at 2pm or 5pm, but more like 8:30pm, or maybe never, the walk was nice. It gave us an opportunity to take in more and for me to take photos of the misty evening that had turned the glassy rice paddies blue and green. 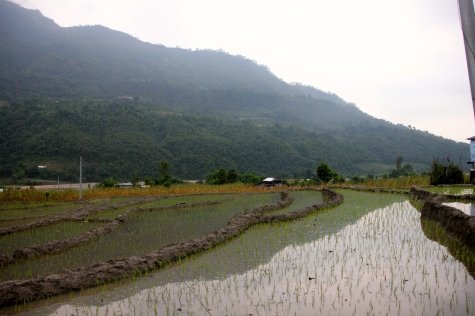 First of all: Dhading is nothing like Archalbot and Bharte. Almost all the houses collapsed or became tear-downs. 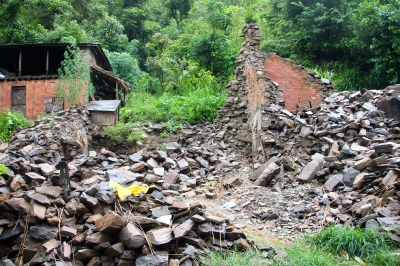 However, the rebuilding that’s already happened here is amazing. We realized right away that even though we don’t have the capacity to do tin delivery in a place like this, we don’t need to. House after house had been fully demolished by hand, materials organized in to piles, and new homes made from extremely innovative techniques. Our favorite was this one, made almost entirely out of doors and windows. 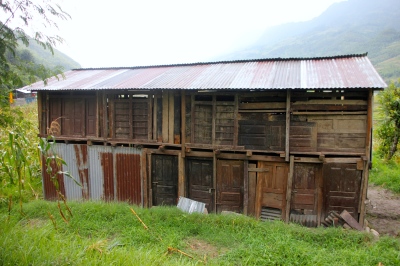 We followed this road for what seemed like forever to its endpoint in Khahare. Bishnu’s mother came to meet us, and led us across a suspension footbridge over the river (this river and footbridge, has been one of the major obstacles to efficient aid delivery in this Tripureswor). And then there we were, at Bishnu’s house in Tripureswor Ward #6. We left Lamjung at 8am, and arrived here at 8:30pm.

Not sure what we’re doing here, but I guess we’ll find out, and then I’ll tell Janet about it. 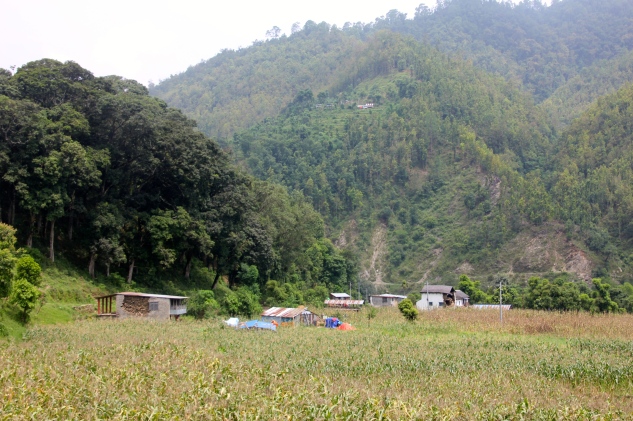