We are having a family get together in Asheville, North Carolina. My dad is turning 80 this summer, and it’s Father’s Day, and Bishnu is pregnant with a baby girl. She and Youba arrive on a red-eye from San Francisco, Bethy and I fly in from Connecticut, and my parents drive over from Chapel Hill with Ricky and Julie and the kids. We plop our bags in a cluster of wood-paneled cabins shaded by rustling trees. It is the first time we have all been together since Bishnu got married last year. Now she is Bishnu Subedi Bhatta.

Bishnu and Youba have made the questionable decision of asking for name suggestions. We bat around ideas as we eat ice cream and go to the playground and climb Chimney Rock, where, even though there is an elevator, Bishnu takes the stone staircase up to the top, plodding along step by step while Youba fawns hopelessly over her. At the summit we take a family photo, the North Carolina hills yawning green in to the distance, an endless rustle that is too far off to hear from the top of Chimney Rock, giving way to blue.

In the six years after I first showed up in Kaskikot and before Bishnu came to the US, we would talk on the phone from time to time. It was always morning on one continent, and evening on the other, and in the decade since then I can’t say the phone connection has improved much. Through the static I’d hear about how Saano didi and Mahendra’s families were doing, and whether the millet or corn stalks with their stacked Groucho Marx mustaches had recently been planted or cut down. I’d tell her about New York City, where I was living, and say that Mom and Dad and Ricky were fine. We ended most of our conversations the same way.

“Where should we go this time?”

And then we’d plan a meeting at the Kalika Temple, or in the kitchen with Aamaa, or on a mat in the yard to paint our nails, or at the festival of Teej. And then we’d say goodbye, and go to sleep to meet in a dream. And always in Nepal.

It has always seemed to me that Bishnu and I were born in to this world with a thread between us, translucent, like the kind used in mobiles or dental floss or to catch carp, because it is unassuming, tensile, and indestructible. The kind that seems as if it can be spooled out forever without reaching the other end that’s buried somewhere in its bottomless coils.

I decide to print the Chimney Rock photo for Father’s Day, which requires sneaking away in to Asheville. We need three copies of the photo for Dad, Ricky and Youba. While I’m out in Asheville I send a text to the family chat to ask if I need to pick up any ingredients for dinner. My mom replies.

I giggle at auto-correct, which has apparently learned Youba’s last name already. My mom means “dal bhaat,” traditional Nepali food–but the more I look at this, the funnier I find it anyway. My fingers tap over the keys.

Does this mean they picked a name for the baby?

It is Youba who replies.

Dal sounds like a boy. Shouldn’t it be Dali?

My mother and I become ecstatic over this. Bishnu’s kid is immediately christened Dali Bhatta. Mostly it is only my mom and me who think this is brilliant. It could be worse, though. My mom called me Loolie-tabooli-tabootznicky…and by “called” I mean “calls.” This is a true story. I was named for my grandfather Louis, and my family turned it turned into Tabootznicky.

We spend the rest of the weekend fishing in the pond, making s’mores on the porch, and turning the kids upside down. Bethy and I are staying in a cabin with Youba and Bishnu, and my mom has brought Bishnu an old notebook along with a pile of belongings from her now-“old” room in Bethesda. We flip through its pages, mystified and awed, like the Dead Sea Scrolls. It contains, in Bishnu’s handwriting: a list of instruments needed for the prehistoric version 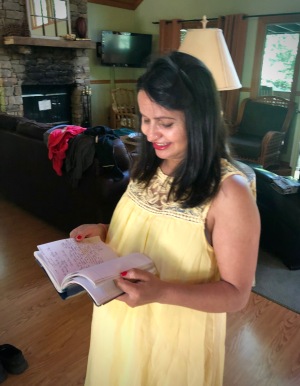 of the Kaskikot Dental Clinic; draft text for a sticker about fluoride toothpaste to be printed and posted in Kaskikot shops for vendor outreach; and practice answers to questions Bishnu expected to be asked at her visa interview with the US Embassy in 2008. She does a dramatic reading in the living room.

I remember when we bought Bishnu’s first pair of jeans. She looked as out of condition in jeans then as I did in my floppy kurta salwaars, each of us yet to learn to fit our bodies to these foreign garments that we irrevocably longed to inhabit. The more time Bishnu spent attending different trainings and programs that year, the more time I spent at the house with Aamaa alone, learning to move the goats about and cook and plant and cut. When Bishnu was away, Aamaa and I developed a quiet and comfortable flow together. Then Bishnu would come back for a day, arriving on the last bus at 7:30 at night, and I would feel a pang of sadness. The loss of the illusion that I was useful. I would fall back in to following Bishnu around and learning from her for the next twenty four hours. The spool would turn inward, we were drawn together, arguing, sitting in the kitchen, going to the temple, teaching each other about our worlds.

Bishnu always left to go back to her training programs early in the morning. They got progressively further away- Sarangkot, Pokhara, Damauli. America. (I didn’t know it then, but there would be a time when Bishnu was to wake me early in the morning in Bethesda, before going to work in Virginia.) On these mornings I could never motivate myself to wake up any earlier than necessary. Instead I would close my eyes to stave off departure, and then in the dawning bloom of morning, Bishnu would come take my shoulder to say goodbye, and slip out the door to catch the 7am bus. It always seemed, once she had been here, that she was going terribly far away; suddenly, I would be at a lose end. For a few hours, everything seemed empty.

And inevitably, after some period of months, I would spool away to America, and we would meet in a dream.

It is 2019. In my parents’ cabin, I assign my nephew Jonah, Ricky’s eldest and and a lanky eight, to instruct his three and four year old sisters as to how we are going to surprise three fathers with their family photographs. Jonah orders his sisters about for fifteen minutes, placing them behind the curtain, behind a couch, and practicing a chaotic toddler chorus of “Happy Father’s Day!” It is decided that I am to cue the surprise with a casual unsuspicious phrase, for which Jonah has selected “Wasn’t it nice weather today!” With this, my nephew and nieces are to spring from their hiding places and proclaim the happiness of Father’s Day.

The plan goes remarkably well. Youba’s features spread momentarily in to an arrangement of euphoric surprise: he is going to be a dad. And then, a collage of moments fluttering around us. We coo over Dali Bhatta. Jonah and Eli and Nell swing elatedly in the hammock, laughing hysterically over each other, until my dad and Ricky and Youba take their places. The trees around the cabin fall in to a still sheltering, rustling blessings over us, and the sun drops slowly over the hammock, delayed like a water droplet on velvet. We are gorgeously suspended in time.

Bishnu and Youba have booked a 6am flight. So it is still dark when Bishnu comes in to wake me the next morning. I roll over and can almost feel the straw mat under arm as Bishnu whispers, “Bye Laura, we have to go to the airport.” I wrap my arms around her and Dali Bhatta, suddenly both at peace and without coordinates; it is an old feeling, ancient as the notebook and the Dead Sea Scrolls, bottomless as a whole new human being.

The enormous future seems unimaginable in this pre-dawn, where we stretch away in to a miraculous dream, until we are real again.

4 thoughts on “To Meet in a Dream”