Bishnu and I went to the field at about 7am to cut grass before breakfast.  After we ate, it was time for more house painting.  Fortunately, the structural layer involving buffalo poo is all done, so now we just have to go over it again with thinner mud that has color mixed into it.  This is how the house ends up orange on the bottom and white from the middle up.

The village looked like a party.  The jaunty line where the orange and white paint meet seemed to be winding from house to house in the sunlight, leaving its fresh mark on one cheerful home after another.  Women splattered in paint and mud were scattered over rooftops and sticking out of the grass behind their houses, painting away. 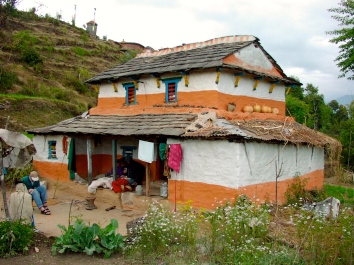 Our house is shaped kind of like a house on a house.  There is the roof over the first floor, and then the attic built on top of that, and then a triangular roof on top of the attic.  I came outside to find Bishnu and Aamaa standing on the highest roof, painting the uppermost part of the house.

As I stood there planning my next move, Mahendra came over carrying a severed goat head and smeared blood over our door.  His family was roasting the body in their yard on the terrace behind and above our house, in preparation for today’s big meat-eating celebration.

I climbed up to the lower roof, where I go frequently to lay out laundry in the sun, and after a while I got bored waiting for Aamaa and Bishnu to give me something to do.  So I did what you would do if you were standing on a middle roof with nothing to do: I made to climb up a level to the upper roof.

Aamaa immediately had a fit about how I was going to fall and kill myself.  “You can’t, you can’t do it!” she cried, as if she didn’t know by now that the fastest way to get me to do something I’m unqualified for is exactly like that.  And Bishnu expressed her disdain in characteristic fashion by smirking and standing in that unsympathetic posture that says, “What are you going to do, American?”

This attracted the attention of Mahendra’s entire family on the terrace above us, where they had previously been observing the headless roasting goat.  Just as I was realizing that climbing on to the upper roof really wasn’t that easy, I also took some pleasure in being more interesting than a headless roasting goat.  I calculated that climbing up on to a roof wouldn’t be all that difficult if a) I hadn’t been wearing a lungi and b) I had full confidence in the stability of the upper shingles.

So there I was.  Ironically, the only one trying to help me was Baa!, Mahendra’s father, who as a general rule seems more ambivalent than anyone of my right to show up like this, to explore the poverty he got stuck with like it’s some kind of escapade.  Let’s just say that Baa! has shown a distinct lack of confidence in my ability to be a fast learner.  But from edge of the roasting goat pit, he was, quite generously, making emphatic motions indicating the pulling up of one’s lungi above the knees.

Let’s face it – there really is no way to climb up from a middle roof to a top roof in a lungi except by grabbing on to the shingles over your head and jumping.  You hope for the best and don’t ask yourself what’s really worth risking your life for.

I was up.  The shingles did not fall off the roof, but Aamaa was still yelling “YOU CAN’T!” in a prolonged and energetic babble that apparently couldn’t be cut off simply by being proved incorrect.  I stood to my full height–more than enough to be a chimney for this house–raised my hands up, and tromped around defiantly.  Great view up there.

And that ended the show.  Everybody went back to their business.  Roasting goats; smearing mud.  I, however, still had nothing to do.  So when Bishnu and Aamaa went around to the other side of the house, I decided it was time to go down.  I returned to the spot where I’d come up.

Well, let’s just say that leaping up is one thing.  Leaping down a different matter entirely.

The audience had dispersed.  So it was before the eyes of God alone that I saw myself peering off the edge of one little roof, down to the top of another, reaching one leg down and straining with my toe, which dangled a good foot above the sloped shingles below, at the bottom of which was a nice little drop to the ground.  I looked over my shoulder to make sure nobody was watching.  I tried everything: this leg, that angle, slide on my bum, brace to the left, hike up the goddamn lungi; I looked for another disembarkation spot, an invisible step; I considered the unthinkable—waiting for Bishnu to give me a hand.

With sudden clarity I thought of Katharine Hepburn climbing houses (I’ve been reading her memoir, of course), and wondered if the roof below me could support my weight if I just jumped.  I pictured myself tumbling off the edge below, breaking my leg, and thinking that any small concession would have been a better gamble than loosing every last shred of dignity (and my leg).  I really dwelled on that image – what it would feel like, lying there on the ground in my own pain and stupidity.

I jumped.  I landed softly on the lower roof and walked over to the other side of the house, where Aamaa and Bishnu were still painting, and demanded that they give me a job.