So we’re in the final countdown before 20 of our field staff and 12 dentists, public health specialists, and students arrive here on Monday night.  As I’ve previously explained, we are trying very hard to steel ourselves against the persistent unraveling of planning that seems to occur despite all efforts to the contrary in this neck of the woods.

This steeling involves checking and rechecking that hundreds of people will show up in rural locations for dental screenings, and that our own field staff will make it here by Monday night (our best hope that everyone will be on

time for the start of training on Tuesday morning…very crafty).  We’ve combed through a detailed inventory of supplies – mind you, none of us are dentists, yet we are in charge of the 2% Chlorhexidine solution – and we still have to shop for 50 teaspoons (don’t ask, this is my life, it’s real).  We found a training hall and a bus for forty people, and there are currently no political strikes or holidays scheduled.  I reviewed the whole thing with Dr. Sokal on skype and drew a layout of our workflow complete with the number of chairs and tables we need.  We booked nine people on one flight from Kathmandu to Pokhara, and hopefully, the flight will not be cancelled.

So this week it snowed in Connecticut, and with the bad weather, Dr. Discepolo, a pediatric dentist coming from UConn, missed her flight.  Because even Connecticut starts going haywire when Nepal gets involved.  Fortunately, Dr. Discepolo was scheduled to come in a day early, and will be here Monday instead, so we are ALL SET.

Today while Aamod and Gaurab were in Puranchaur meeting with people in the local health ministry about the upcoming project, and visiting primary schools (again) to make sure they’ll be sending mother/child pairs for screening, Muna and I were at the office fielding other essentials.  Among which was printing jackets for everybody, which we need by tomorrow night.  But after the Nepal Health Research Council and the 10-tab spreadsheet of budgets and reservations?  Jackets – no sweat!

We’d picked out a few samples on friday, and Muna called the printing press this morning to ask if we could send photos to inquire which jackets could be silkscreened.  The printer told us he had to physically see them.  So we went to the shop to get the jackets, and while Muna took a taxi to the printer to show them a puffy vest and a fleece, I commandeered basically everyone in the store to help me take 40 more puffy vests out of little stuffing bags so I could check off sizes on a spreadsheet.  Then we finished that and I tried on option two, the fleece number, so I’d know what sizes of those we’d need if the vests didn’t work.

Muna texted: “They said they can’t print on either type.  I am coming back.”

We put everything away again.

Muna returned.  “They told me, even if someone says they can print on this vest or this fleece, don’t let them.  It will be ruined.”  Ok then.  Back to the drawing board.  We tooled around looking for something else that could be printed on.

The store owner came in.  “I can bring this vest to my Son-in-Law,” he announced. “He has a factory, and I’m sure he can print this.”

“But the other printer said–”

“My  Son-in-Law can do it,” the owner declared.  “Even if we have to stay up all night, we will print your jackets by tomorrow evening.”

We considered.  It was decided that I would go with the store owner to visit the son-in-law’s factory to review the case.  But only after lunch.  The store owner had not eaten since early in the day.

Muna returned to the office to call all 20 of our field staff, again, to remind them when and where to appear tomorrow night, and I took my computer next door to the jacket shop to work on a Welcome Packet during lunch.  (I say it’s Welcome Packet, but in point of fact, I think I just need the list of 40 participants and the screening layout and the schedule where I can see it at all times.  It’s for me, forty times.)  After lunch, the store owner pulled up in a car and took me to his son in law’s factory.  We presented the vest option and the fleece option.  The vest proved unprintable, but the fleece was a definite.  Definitely a definite doable printing job.  I poked my head in to the “factory,” which was, in top Nepali style, basically a living room.

“I will take you to the printing shop to arrange the logos on the computer,” said the Son-in-Law. “We have to wait for my colleague to go ahead on his bicycle.”  Courteously, we waited for the colleague to get a ways ahead on the bicycle, and then we caught up on a motorbike.

We entered the printing shop and presented a sketch of the layout to be arranged for the jacket.

“Yes, I have this pattern,” said the printer.   He pulled up our jacket on his computer.  “This, right?”

“The young woman was in here earlier,” he explained.

I texted Muna.  “I’m back at the same printer you took the sample to this morning.”

It takes about an hour an a half to arrange the logos, mainly because one of our visiting dentists teaches for a Cambodian University, and their logo has Khmer lettering that won’t come out right.  The printer guy painstakingly recreates each picture of the Khmer lettering in the logo for the Cambodian University.  He arranges all the pieces of the printing for our jacket and prints it out on laminate.  The son in law comes back and gets me and the laminate on his bike.  He deposits me on the main road so I can take a bus back to the store to get the rest of the jackets out while he prints a sample at the “factory.” I seriously have no idea how this day would have turned out if not for the shop owner and his son-in-law, who basically saved our butts.

It’s now 4pm.  I take out my spreadsheet again.  The entire staff of the store that Muna and I entered at 11:30am today begins taking out fleece jackets from various unpredictable locations.  Fleece jackets appear from every heap and rack of mountain-wear, and they are sorted in to piles while I read from my spreadsheet, again.  Everyone is concerned that the men are not to wear hot pink fleece jackets, and this must be accounted for.  The floor is is covered in fleece jackets. 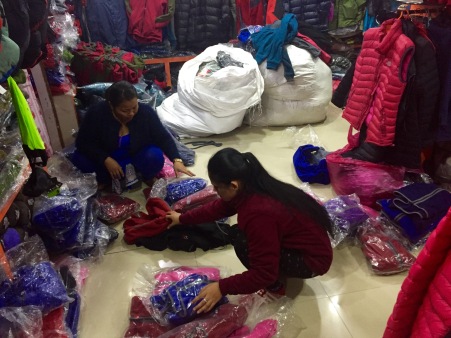 I leave for an hour and a half to go do an interview with a local paper, and come back at 8pm.  The son in law has brought a sample jacket with him.  The only problem with it is that the whole thing is too high, and the hood falls over the printing.  Also, while putting the print on, they accidentally melted off one of the drawstrings at the hood and pressed it in to the shoulder of the jacket.  This too must be corrected.  They promise not to melt any parts of any of the other 39 jackets, which I send off in 4 oversize plastic bags.

At 8:45pm I head home for dinner.  Among the things I did not do as planned today: write a training schedule; print referral tickets; send an abstract to UCSF.

Why are you so late? Bhinaju asks.

One thought on “Fleeced and Ready”