The bus to kaski is very hectic right now: in addition to the heat, and the rain, the road has been sporadically damaged by flooding and landslides.  After last week’s sweltering ride with Aidan and Pascal, I decided that this afternoon I would try getting a ride with Nabin who lives up in Parapani and drives a taxi.  He’s always willing to drive me home at the end of the day for a pretty good price, rather than drive his car back up to Kaski empty.

I called Nabin on Tuesday to fix our plan, and then rang him up again as we were leaving the office at 5pm on Wednesday. He picked up, but the connection was bad and I couldn’t catch what he was saying.  I decided it was “I’ll call you right back,” and then I hung up.  I texted to say I’d be ready at 5:30, and went back to my room to putter around on the internet for a while.

I called Nabin at intervals but he didn’t answer.  The clock drifted past 5:15, then 5:30, when the last bus leaves from the bus park for Kaski.  At 5:45 I thought, I better move out if I’m going to get to Kaski today.  If I couldn’t get a hold of Nabin, I was already stuck making the hour long walk from Naudanda – potentially in a downpour, in the dark – because the last direct bus had left already.  I put on my backpack and walked out to the main thoroughfare running to Lakeside.

“Oh what the heck, I can take you to the bus park,” the guy said, and turned left.

I’ve never tried this strategy for lift-getting before, ever.

As we drove up the road to the bus park, the guy said he’d served with the US Navy in Bahrain for eight years.  I didn’t even know that was a thing – is there water in Bahrain? – how to Nepalis end up in the US Navy? – and he told me more about it, but I couldn’t hear him over the wind in my ears and the honking traffic, so all these things remained mysteries.  Back in Nepal, he wasn’t doing much at the moment, he said.

“So where are you headed?” the US Navy guy asked.  I explained about Nabin, and about getting to Kaskikot tonight, and that I supposed I’d walk from Naudanda.

“Oh what the heck, I’ll put some gas in the bike and take you up to Kaskikot.”

“No problem.  I’ll just get some gas first.”

“How much will it cost?” I asked, wondering if that was the least of the confusion.

The guy pulled over to get gas.  I pondered the situation.  The next bus to Naudanda might not leave for another 30 or 45 minutes.  It would be dusk, if not night, by the time I arrived in Naudanda, and then it might rain, and I’d have another 60 minute walk.  It seemed like I should be worried about why this stranger wanted to take me up in to the hills at dusk to a place he doesn’t live, but I wasn’t.  I tried to get worried and instead I thought, “Wow, it would be pretty great to get a scooter ride up to Kaskikot right now.”

“Ok, let’s go,” I said.  I determined to give him some gas money, at least.  Also, I have a black belt in taekwondo.

For the next half our or so, we rode up the switchbacks, watching the valley recede in to the hazy, rose-tipped blue of evening.  The day fell away below as we climbed up in to the hills.  I cinched the hood on my rain jacket to provide a little wind protection, but the guy was a reasonable driver and the breeze from the movement felt good. Occasionally I stuck my arm out in the direction of the beautiful scenery, as if it was some kind of compensation I could offer for this inexplicable act of generosity.

We came upon a sloshy patch of suspicious looking mud and disembarked.  The two of us regarded the scene: a pit of soft mud with the gash of a thick tire through it, left by something much larger and heavier than the scooter, and surrounded by pools of brown water.

“I can walk from here,” I said.  I was feeling kind of guilty.  “It’s only about half an hour or so. I’d have had to make an hour walk from Naudanda.”

“Still half an hour of walking?”

“I’ve walked from here many times,” I insisted.  “It will be a real mess if your bike gets stuck.”

“Please let me contribute something for gas,” I offered.  He declined.  He had time on his hands and it was a pleasant trip.  I thanked him, asked his name, and we took a selfie.  Raj Kumar Gurung.

A motorbike came up behind us with two young dudes on it.  They sped over the mud pit.  Raj Kumar Gurung looked from them back to his scooter.

Raj Kumar Gurung, US Navy, revved the scooter and launched it in to the mud pit.  It rolled through to the other side.

“I’m coming!” I said, and stepped directly in to sucking mud-slosh the consistency of hummus up to my ankle.  “Be right there!” I cried, rinsing off some of the brown hummus in a puddle, and then in a clear stream that had had developed across the road on the other side of the mud pit.

Raj Kumar Gurung said that instead of returning back to Pokhara the way we’d come up, he’d continue straight on past Deurali and meet the road in Naudanda.  At this point, he was going to drive past my stop regardless.  I decided to get off a half mile or so early to stop in and say hi to Thakur sir, one of our founding oral health program members, and I insisted that Raj Kumar Gurung at least have some tea before continuing on, but he demurred again.  Off he sped, having lifted me directly from Lakeside to Kaskikot just as night was falling. 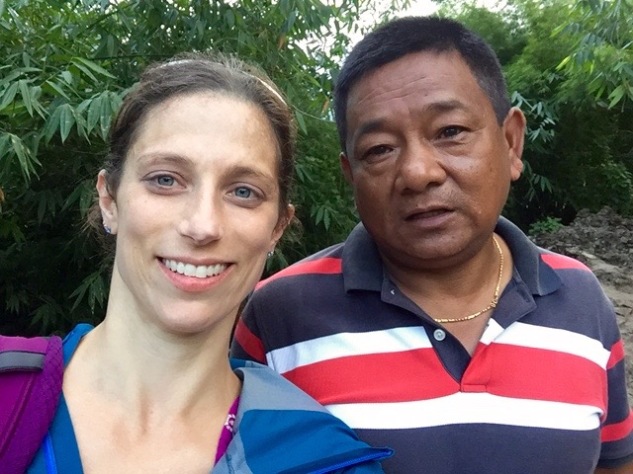 One thought on “Lifts”