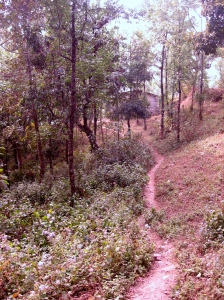 I had heard that there was a small school in the woods, facing south, far below the road that cut through Kaskikot along the mountain ridge.  On a late fall morning in 2002 I went looking for it.

I followed a descending path of broad stones as far as the village mill, and from there I turned onto a winding footpath that halted and dropped and navigated roots in the ground and in some places seemed to disappear entirely.  Soon I heard no sounds except the whir of the trees and the suggestive rustle of an occasional monkey in the tall grass.  I passed a spring and a temple.  I came around a bend.  And then, demurely, as if waiting for a visitor, a stone wall appeared in a clearing up ahead.

I approached the building and emerged from the hushed woods into its open yard, a bald mound of dry dirt looking out over forests and terraced fields.  The view extended all the way down to the valley floor, but the school ground still felt hidden among the trees.  There were two piled stone buildings with wooden shutters and doors, most of which were missing panels, the gaps blocky and conspicuous like missing teeth in the open-jawed windows.  I peeked in to some of the classrooms and saw benches sitting mid-wobble on the dirt floor, facing blackboards whose still-fading scribbles bespoke prior lessons.  These objects regarded each other diplomatically, as if ready for anything but expecting nothing soon.

When I’d left the United States, I hadn’t decided where I was going to end up.  China was a leading 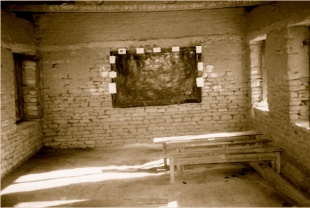 contender.  I was offered a position in a school with 2000 students. My mother didn’t want me to go to Nepal—there was an insurgency happening.  I didn’t know anything about any of these places.  I didn’t speak Chinese, for example.  I spoke French.  I was a terrible candidate to do any reasoning on the topic.  One day, in Bhutan, I was sitting still doing nothing except worrying about where I was going next, when, with as little ceremony as a tenant entering his flat, a picture of a small classroom floated in to my mind and landed there.

To this day I can’t explain why, but I knew that classroom was in Nepal.  I was going to Nepal.

I wound my way back through the forest, past the spring and the temple and the mill, and up a different set of ascending broad stones, I emerged again onto the wide bus road along the ridge.  Directly across from me a man was sitting in front of his house on a low wall.  He was wearing simple brown pants and a V-neck sweater over a long sleeved shirt, and chatting with a round-bellied man dressed in the clothing of a Brahmin priest.

The two men called me over and asked when I had arrived in Kaskikot and what I would be doing there.  I told them I had just been to a small school in the woods, whose name I had forgotten, but where I was hoping to teach.  As it turned out, both of these men were teachers at that school, which was called Sada Shiva Primary.

The man in the V-neck sweater introduced himself as Govinda Prasad Paudel, the English teacher.  For the next two and a half months Govinda and I walked the wooded path back from school together every day.  During that time our friendship was formed, and instead of calling each other by name, we began to follow the Nepali tradition of addressing one another by a familial relation.  I called him daai, or “older brother,” and he called me bahini. 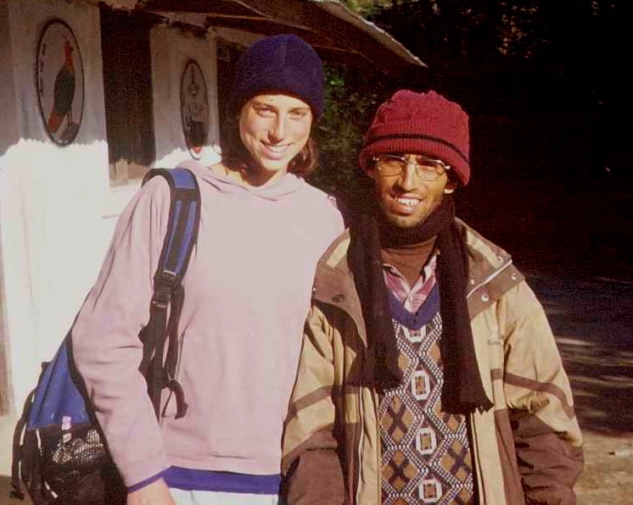