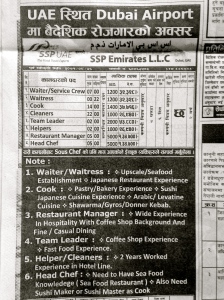 My layover in Dubai was eight hours.  Long enough to trek back and forth many times along the glaring fluorescent strip of duty free shops betwen terminals one and two.  It was daytime in Dubai, but for me it was the no-time that happens during a trip from one hemisphere to another.

I wandered in to one of the bathrooms and soon found myself looking for an earring that had dropped.  A young employee who’d been sitting idly when I walked in came over to help me.  As I was shuffling through my belongings she noticed a coin.

Yes, I said, I’d been.  We got to talking in Nepali right away.  I wasn’t surprised to find out
that Mandira is 26 years old with a 1-year old baby she left in Nepal with her in-laws and her husband, who is also waiting for a visa to travel abroad.  When I asked what she’d paid a manpower company to broker her position in the Dubai Airport bathroom, I already knew roughly what the answer would be: about 10,000 dinars.  Her salary: 900 dinars per month.  It would take her a year to pay off her loan to the company before she started earning anything to send back to her family. It will be a few more years more before she can afford the 3.5 hour flight home to see her then four-year-old child.

It’s a typical story but it’s still amazing to see it in action without having to try. This kind of position has become so preferable to looking for local employment in Nepal that I don’t even have to leave the duty free section of the airport to find Mandira.

The flight from Dubai to Kathmandu is a special kind of cultural experience.  You step out of a hip multinational terminal in to a waiting area where almost everybody who isn’t a white person wearing hiking boots and tie-dye is a Nepali person returning home from a labor contract.  For many it is the second flight of their entire lives.  A large percentage of passengers have none of the practiced movement that comes with routine air travel.  There’s a lot of helping each other find seats, opening and closing latches to see what they do, gazing out the window at baggage trucks, calling to one another across the rows to look at this or that.  It’s about as close as you can get to walking out of an airport and getting on a city bus in Kathmandu that launches in to the air.

On the plane I immediately leaned against the window and tried to sleep.  I’d been traveling for 20 hours.  The young man next to me was quiet and stared straight ahead, and I assumed that he, too, was an amateur passenger just surviving the journey.  After an hour of half-sleeping, I sat up, and as I jostled my position, we exchanged a few words.

“My father just died,” he said.

“What happened?” I asked.

“He was in the U.K.  I work at a hotel in Dubai.  My family just got back to Nepal with his body.  After we land I have to take a 10 hour bus ride home, because they are waiting for me to start the rites.”  He stared ahead. “I usually talk to him quite often, but we hadn’t talked in about three days.  I don’t know why.”

The snack cart came along.

“Can I get you something?” he asked.  I declined, but he asked a few more times, and I declined again.  He bought a sandwich for himself. He asked the boy in the aisle seat – who didn’t look any older than 18 – what he wanted.

“Many of the new ones are scared,” he explained softly.  “So we help them out.”  He bought the boy a cup of tea.  “Are you sure you don’t want anything?”

He opened and closed his sandwich.  “I’m not supposed to be eating this food,” he said.  “We have traditions – it’s called kriya.”

I know about this of course.  It’s not just the sandwich.  The death of this young man’s father should have immediately been followed by 13 days of eating food cooked as part of a series of rituals, without salt, and by wearing only white clothes with no seams, and by sleeping on the ground, and by drinking special water, and by not touching any other people, and by daily pujas and bathing. He should have shaved his head.  But he was crammed next to me on a floating bus.

He took a bite of the sandwich.  “I haven’t had anything to eat or drink since yesterday,” he said.  “Actually, I haven’t talked to anyone.  Now I’m talking to you.”

“I can’t imagine how hard it must be in this strange situation,” I offered.  “It will be good to be in the right place with your family where you can do…all the things.”

“Are you sure you don’t want any of this sandwich?”

“I usually talk to him often.  I don’t know why we hadn’t talked the last few days,” he repeated.

He gazed over the sandwich again to the back of the next seat.  “There’s no point in being sad now.”  He ate a chip.  “I can’t think of what to do.”  He offered me more of the sandwich.

I asked after the details of how he’d get from the airport to a friend’s house to the bus to his house.  It seemed like the only relevant thing to discuss.  Everything else was either too small or too big.

“So you will be with your mother and siblings by morning,” I said. I told myself that things would make more sense then. I wanted to believe that it would be better when he knew what to do.

“Yes.”  He gave the rest of his sandwich to the trash pick-up.  “But when I get there, you know…it will be real.”