Mahendra and Madu are two of the first boys I ever met in Kaskikot. They grew up in the houses on either side of us, and when I first arrived in 2002, Mahendra was about 13 and Madu was 11. 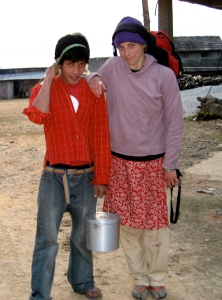 Mahendra has the chiseled features and doe eyes of a movie star and the athletic, wiry frame of a boy who is too restless for his environment. As a teenager, when all the kids built swings for the festival of Dashain, Mahendra would climb a towering stalk of bamboo like a monkey and fix the rope at the top while hanging horizontally, high above the ground. If Mahendra had grown up in the U.S., he would have been the star of the high school soccer team who smokes pot and can be counted on for a party when the parents are out. He’d always hated being born poor in this bottomed out village, even from the time he was very young. It bored the hell out if him and insulted his power. He was meant to be dangerous and to cut his teeth on anything but here.

Madu on the other hand was a gentle, slender boy with a soft voice and midnight skin. I often used to sit in his house in the evenings while his mother brewed moonshine to sell for a few dollars. Like Mahendra, Madu dropped out of high school before he graduated, and signed up with a manpower company when he was about 16. Before he left, Mahendra married and left behind a pregnant wife. Madu’s older brother Jivan left; then Madu left. 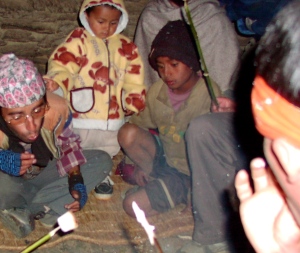 So many of the boys in this village are like Madu and Mahendra. For the first few years I was coming to Kaskikot, we spent a lot of time together working in the fields, carrying loads, pounding and climbing and chopping and joking in the yard over tea. There was a posse of them that used to wander out at dusk after the work was done, to play soccer or roam or plan the future. Sometimes I would hear Barat playing his flute on the other side of the hill, where the posse used to hang out in his yard.

Then they started disappearing. Malaysia, Saudi Arabia, Qatar, Dubai. Madu’s house gained a TV and a new room, and Mahendra’s mud house, like many others, was rebuilt with cinderblocks. Large swaths of the hillside turned year by year from fertile to uncultivated land. One home after another became inhabited only by old people.

Last Monday night I arrived in Kaskikot for the twelfth year in a row. The next morning when I got up, Madu came over and sat in the yard talking with me for half an hour. He was wearing a faux-leather jacket and shoes. He has been working at a noodle factory in Malaysia for three years, first sealing spice packets, then as a line manager. It started off bad: the overtime they were promised not paid, the meals they were promised not provided, the roommate who ate dinner, went to bed, and then didn’t wake up the next morning for a reason nobody knows. Everyone was afraid to touch him, this body that at home would have been sacred. Once Madu got promoted, his salary doubled and it was better. Most of them, he admitted, don’t promoted.

I went to fetch water at the tap. I passed Barat’s yard and the whole posse was there. All home from their various countries this winter. Most of them married. Leaning carelessly against the wall, sitting with an arm angled across a knee, laughing at a private amusement, hair greased and shining in the morning sun. Mahendra looked as glamorously bored as ever, but he did light up – to the extent he does – to see me.

I asked what they’re all doing now. The answer: waiting for new visas.