Didi, Pascal and Aidan and I left for the New Year’s street festival right around dusk. It was already jammed with people and food stalls, a challenge for us because, while Pascal carefully soberly dodges people’s legs and ponders over his food options, Aidan absolutely doesn’t care where he’s going, and he’s only about 3.5 feet tall, and he wants to eat everything he sees, and he can’t take his eyes off anything.  We got some ice cream, and some hot dogs, and some cotton candy.

At 9pm the Gaky’s Light Fellows showed up with arms locked in a blob. It was such a fantastic moment – they were all dressed up and so excited to be there together, and then they practically mowed me down in the street in a mob of happiness.  On the corner a crowd of people was dancing to some impromptu devotional drumming and singing.  So that’s how I ended up on New Years spinning around with Aidan on my shoulders and Pascal on my leg and our fellows clinging to my hands while we all danced in the street to a bajan.

The street crowd grew so thick that it became river.  I left Didi and the boys and waded in with our fellows – we were literally all holding on to each other and being carried down the street by a massive crowd.  Every once and a while someone would pick the person right in front of them and, just for fun, shout: “SANDIP IS LOST!” or “SOMEONE HOLD ON TO PABITRA, SHE’S SMALL AND WILL GET LOST!”  Samundra, our program director, had a scarf wrapped tightly around his neck.  “SAMUNDRA’S NECK IS LOST!” I cried.

Eventually, we got lost.  There were just too many people, our group was cleaved, and I ended up swimming along with Sabina and Asmita and Anju.  All the phone networks were jammed and we couldn’t get through to any of the others.  We were finally catapulted through a gate to the fair – I mean washed over the threshold while clutching each others jackets, past a wall of police trying to look for tickets. We came tumbling out next to a ferris wheel like Alice in Wonderland.

We dusted our selves off and looked around.  It was 10:30pm.  There were lights and huge objects everywhere, surreal and dizzying.  The four of us stood locked together so we wouldn’t be separated in the hectic sea of people, until we boarded a boat that swings back and forth on a pendulum.  We let people in line pass us until we could get a spot all the way at the tip of the boat, where we had the highest view, where all the strange fair lights streak across the sky and the top of the ferris wheel is right there, and you can’t ignore the moment the boat reverses direction and you’re suspended for an instant in mid-air with nothing under you.

By this morning, Pokhara looked like the day after the worst frat party you’ve ever seen.  Trash, tables askew, dejected looking tents, all kinds of equipment and decorative paraphernalia sagging with a January 1st hangover.  Even the sunrise seemed weary.  But it was pretty worth it while it was happening.  Welcome to 2015, World.

Which reminds me of something.  When we’d left for the street festival, Aidan had been begging for a new light.  Throughout the festival they’ve been selling slingshot lights with wings that sail way up in the air and then slowly float down, so the night was full of beautiful falling blue lights.  Pascal, like me, is enthralled with the light but cautious of losing it, and kept his slingshot safe in his pocket most of the time.  Aidan on the other hand is completely reckless.  He’s too excited about shooting the light up in to the air to worry about what happens to it, and we had rescued his flying toy from more than one rooftop on tuesday night.  Each time it got lost he was utterly dejected, and then we’d retrieve it, and he would go right back to catapulting it at the night with unbridled enthusiasm.

“Laura auntie,” Aidan explained to me as we walked in to the street again on New Year’s Eve, “when you shoot the light, it goes up toward the sky like this.”  His put his hands over his head and pointed his little fingers toward his palm, in an angled T-shape, to show the way a light sails toward the sky.  “But then just when it’s about to touch the sky…” his eyes got big and his palm drifted up “…the sky MOVES, Laura auntie!  The sky MOVES!” 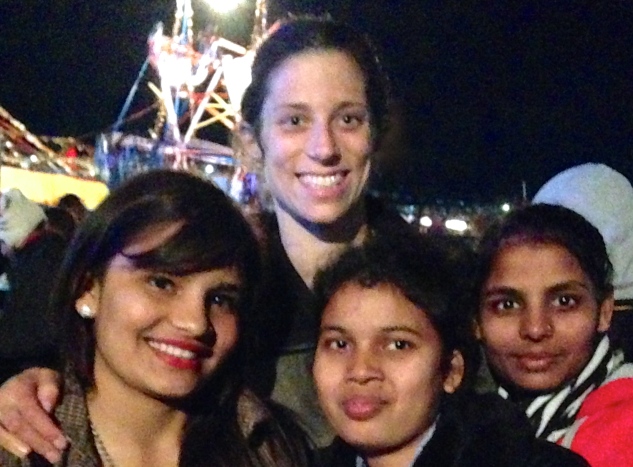