With a lot of thought going in to our current Kaski Oral Health working areas, we’ve also had quite a bit of discussion about whether, how, and why to get involved in a village closer to the center of the damage, where a higher percentage of houses – in some cases up to 90% – have been destroyed.  Lamjung, the next district over, shares its eastern border with Gorkha and this border was the epicenter of the earthquake. 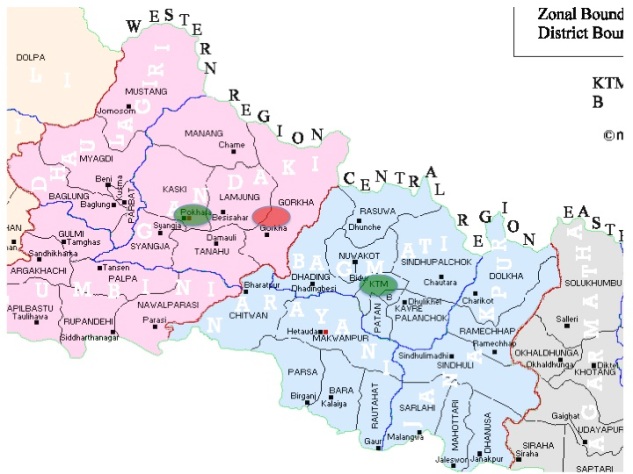 With all this going on, I’m gradually appreciating how much experience we’ve developed in community-centered design that incorporates multiple systems and people to address even a very specific issue like dental care.  I think that if we can work in one of these districts, we should because we can.  I also feel it’s important to have local, grassroots organizations involved and setting examples in the places where large agencies are doing a lot of work.

As I ponder how we can turn this expertise in to something useful for earthquake-relief (and I think we should have a moment of appreciation for the activity of pondering about turning expertise in rural South-Asian dental care in to earthquake relief), it seems the first step is to be working with a single community in a defined area.

I am hoping that if we can locate a community that’s a manageable size for our capacity and funds, we can at least do a really good job of using a community-centered approach to set up transitional housing in one Lamjung village, with the goal of creating an example to be copied by agencies with more resources. Once we see how that goes, we can decide if it makes sense to bring in another layer in the same community, such as the counseling element that Dr. Aung from the WHO suggested.

I’ve looked at four types of housing so far: Kiran’s tunnel, a simple tin tunnel, something called earthbag building that uses sacks of dirt and can be made to look very much like a traditional home – and then there’s the option of simply providing people with a corrugated tin and some other materials and letting them have at it.

All this was kicking around in my head the other night when I was in Kaski with Aamaa. While we were having dinner a crazy lightening storm started—the kind that’s more like a constant flickering than separate strikes of lightening. There is a lingering sense of nature’s awfulness in the air and everything feels foreboding, even the normal, dramatic patters of weather typical to this season. As we turned in for the night, it began to pour.

Lying in bed between the sturdy earth walls of our house, listening to rain clang on the tin roof, is one of my places of greatest serenity. This is my favorite way in the world to fall asleep, and my favorite way to wake up. You can hear the entire the distance from the ground under you up to the sky, but all the noise and space are close and balanced and soft like a blanket.

In my half-dream state, I found myself thinking about people lying in their makeshift shelters, with doors of plastic sheets or thin bamboo or synthetic, brightly-colored things, easily torn down or penetrated. Aamaa walks around all day with a key to this house hanging around her neck. She even sleeps with it.  It suddenly seemed like a great indignity to have no door to close, nothing to lock up, no single space to block out the rest of the unknown and uncaring world.

Not to mention the practicalities. Where are people storing any precious photos of grandparents extracted from the rubble? The few pieces of jewelry or any cash they are lucky enough to still possess? You’d have to walk around with all of this stuff on you all the time. 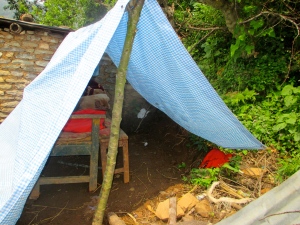 My mind reached about, searching for something that people could shut tightly, a safe box that can’t be stolen when there are no bolts or securities anywhere. Into my head floated a picture of a locked metal container with a pipe welded perpendicularly to the bottom, and a wide plate attached to the other end, like an upside down T. You could dig a hole, place the box in the ground so that the top of the T rests on the bottom of the hole, and then fill the hole in so only about half the box is above ground with the top accessible. There would be no way to lift this locked, anchored box, so if someone wanted to steal it they’d have to surreptitiously dig up the entire affair inside your tarp-house and then sneak out with a large metal T sticking out from under their shirt. Which, if they could pull it off, AND get your lock undone, then hats off to them.  Because the key would be on a string around your neck.

I fell asleep to the sound of the rain, wondering if we could produce a safe like that.