It seemed we took all the right steps to set up our first transitional housing project.   I attended two of the cluster meetings of INGOs and government, one on health and one on shelter. I read articles and talked with people who know about various forms of building and disaster housing. I learned two things: that we should keep design minimal and focus on raw materials and local building knowledge, and that we could only learn more by doing. Combine this with eight years of experience coordinating grassroots outreach in rural Nepal, and you have the basics.

We arranged our first project through our dental technician in Parbat, an assertive, organized woman named Anita who’s been very proactive about contacting us with information on communities in need in Parbat. We made a delivery of emergency tarps and supplies to Parbat a few weeks ago that went very well. Anita helped us locate a 23 homes in a village called Tanigaun where people were still living outside. She visited to do an assessment and collected data from the local government.

If all that weren’t enough preparation to rely on, our plan was basically just what the major relief agencies are doing: deliver sheets of corrugated tin roofing, and let people build using local materials. We planned to add a day working alongside a few especially vulnerable families to get their shelters up faster. On Friday night, Anita was on the phone with our field officer Gaurab until midnight, getting 25 bundles of tin, wire, and nails on to a tractor, which left the night before so that the supplies would be in Tanigaun in time for our arrival on Saturday. 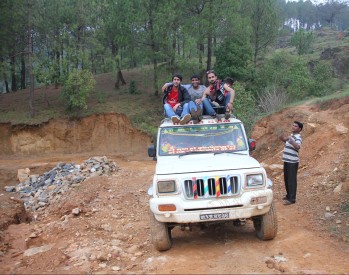 We were all in good spirits as we drove out to Kusma city at 7:30am. Four of our Gaky’s Light Fellows came to help build. In Kusma we met Anita and switched over to a jeep, which had the requisite 20-something boys covered in car grease clunking around underneath it with medieval looking tools right up until the moment we spun out of the lot with Gaurab and his friends sitting on top of the vehicle.

This is the part of the story with another bumpy 3-hour jeep ride on a dirt road through rolling green hills and the occasional village. One guy had to keep getting out of the jeep and laying stones in the road for us to loll over ruts and mud pits.

Which makes a good story—but honestly, a lot of Nepal is like that. The greasy jeep guys are always under your rented vehicle; the road is always rutted and laying stones to get over the next rut is just called driving. People sit on top of unreasonable modes of transport wherever they are. None of this is actually exotic in Nepal. And this is an anti-romantic post.

So I’ll cut to the chase…Tanigaun didn’t go anything like we thought it would. There was the welcome, the flowers, a woman grabbing my arm in tears. All the things you see in pictures that make you think you’re doing the right thing.

It wasn’t until we began helping people bring their bundles of tin to their houses that we realized we weren’t doing the right thing.

Many of Tanigaun’s homes have been damaged, some of them quite badly, and many are unlivable. A number of people were sleeping in the school. I visited the Dalit (in non-PC terms, low caste) area, and there were houses with large holes in them. Other houses had cracks of varying sizes here and there.

But there was plenty of reusable tin in Tanigaun. What’s more, a variety of public bamboo structures had already been made, using the same technique we hoped to help people with in their own homes. But if residents of Tanigaun were already in the habit of constructing safe, plastered-bamboo structures, why would anyone sleep in a school for a month?

In fact, raw materials were lying around everywhere, but the people appeared confusingly passive. One group of families showed us a shelter where they had four families living together, and begged us to reallocate more tin to them for space. But they were using corrugated tin as siding under a tin roof – which, in case you’ve never lived in a shiny tin house during a pre-monsoon summer, is a miserable idea, while a bamboo house with a tin roof is cool, sound-insulated, and sturdy. They had enough tin to cover double the area they were living in.  Already.

And that’s really the heart of the matter. Sheets of corrugated tin aren’t going to help anyone who isn’t motivated to build under them. What we should have done in Tanigaun was to come with nothing but manpower, demolition tools, and moral support. We could have provided tin later as needed.

My heart sank all the way to my feet and I felt so ashamed I wanted to disappear. With all that planning, we’d still made the ultimate beginner’s mistake: providing material goods in place of mobilization. People were bickering over unneeded tin sheets, both exasperated with us and trying to impress us with their individual causes, playing out a story I’ve watched a million times—I’ve designed my entire dental care project to subvert this very drama.

I should have known. But this is exactly what all the experts are doing – without the personal contact that we were able to bring in.

It wasn’t until late afternoon, when we were about to leave, that I stopped at a structure I’d passed a few times. There was one plastered bamboo hut sitting in the middle of the village, and I finally stood still and inspected it carefully. A line down the center gave away that half was old, half freshly made. Someone came over and told me it had been the house-owner’s kitchen, and after the earthquake, he’d simply added on another half.
“Ah – here he is now,” said the neighbor.

I looked up to see a man in shorts and a cap walking toward me, weathered with a look of curiosity lingering on his features that made him seem both coarse and naturally kind. He told me his name was Tulasi.

“Did you make this house?” I asked.

“Yes.” He didn’t elaborate. But he didn’t look the least bit impatient either.

I asked how long it had taken him.

“The first three days after the earthquake, I couldn’t really do anything. But then I started and it took me about a week and a half. My daughter and I built it.”

Tulasi had a funny way of talking, almost a stutter but not quite. In all likelihood, this man, who is also Dalit, has faced a great deal of discrimination in his life. His daughter told me that it’s just them and her little sister. Their mother is “gone” – either run off or passed away, I didn’t ask which.

“Where is your original house?” I asked.

He pointed to an empty lot across the road. He’d already demolished his old, cracked house. There was nothing but a pile of stones.

Every now and then, I meet a type of person who has a prophetic quality. It has a sound like a thick velvet curtain that mutes the noise and nonsense of the rest of the world. You probably know what I’m talking about. These are usually the quietest people, the ones who are simply being their wisdom. They have nothing to prove, and often nothing they need to achieve. They simply exist with tremendous grace. 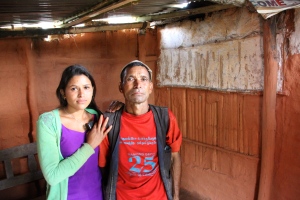 The inside of Tulasi’s bamboo house was cool and smooth. While not luxurious, it was far more than an emergency hut, and will certainly shelter this man and his two daughters through the monsoon. It will be safe in case of another earthquake. If they take care of it, it will last years, and indeed, the original half that was the kitchen turns out to be five years old. They have plenty of time to rebuild their main house in safety.

His daughter raised her hand towards a joint in the ceiling. “It was just leaking right here,” she said, “but we put your tin up already. So that’s solved.”

Everyone else’s tin was still sitting in their yard.

I wonder if Tulasi noticed that?

On the way home we had a long walk through the valley. The river rushing by and the green hills tumbling all around, endless in every direction, my thoughts spiraling out the same way, uncertain where to land. Everything seemed like a fool’s errand, and we were all disspirited.

I kept circling around this image of that simple bamboo house. This guy had built something magical in the middle of a gloomy swamp, and he didn’t even seem to notice or care that it was amazing. He just needed a house. It was only amazing because nobody else seemed to believe in houses – in every other respect, it was the most obvious thing in the universe.

It wasn’t until a few days later that Robin reminded me the World Food Program just distributed 1.5 million pounds of unedible rice, or that there was another disaster where over 800 people died from a relief distribution of moldy grain. You want to bat 100%, but that never happens. In our case, people will find some way of using our tin, even if it’s not the way we wanted, or even if they sell it. We learned an expensive lesson, but nobody was hurt – actually somebody will benefit, somewhere – and expensive lessons at scale cost millions of dollars.

And besides, I’d met Tulasi. Maybe when I tell my grandkids about being in Nepal after the great earthquake, the only part I will really need to make sure they understand will be Tulasi’s bamboo house.

We still had plenty of room to adapt for our next project. These were my meditations as I walked along the evening river with the rest of the group. I suddenly remembered Robin had called me earlier in the day while I was dealing with the tin situation. He’s my friend, the crazy truck driver, who gave a presentation on earth bag housing recently. I have desperately been wanting to try this out, but haven’t been able to find anyone to help. I rang him back.

“Bad news for us, good news for you,” Robin buzzed in to my ear over a bad cell connection. “The project we had planned in Gorkha has been cancelled. So we need to build an earth bag house before June 12.  Do you have a place where we can collaborate?”