Thirteen days ago, Butu bouju’s father died. Out of all the possible things that might have been happening today, the whole community was gathered at Butu Bouju’s house for the last day of kriya. As the sound of the priest reading propagated over the arrival and bustle of visitors, Butu bouju’s house had that particular feeling of the world being unveiled after a deep and intense period of ritual mourning. Aamaa and Pascal and I pulled up plastic chairs in on the patio, where many relatives had come to pay respects. So the chance for us to be with family and community before our departure across the world was brought about by a death.

“How are you both? Laura, when did you arrive, when are you leaving?”

“We’re leaving for America today,” we told everyone. “We’re both going.”

Bhim arrived. We haven’t seen each other in probably three or four years. This November will make fifteen years since Bhim first brought me to a small house around the corner, where a widow and her daughters were living, and offered to have me move from his household to theirs.

Bhim shook his head and smiled with that ironic twinkle he gets sometimes when I’m just not figure-outable. Which is a lot of the time.

“This has been a long story,” Bhim concluded.

“Tell Bishnu hello from me,” he said.

We left the kriya and went home to finish organizing. I’ve left this house nearly twenty times, and always the leaving is leaving Aamaa. After that, it’s just physically departing from Nepal. Bringing Aamaa along feels like bringing the house, and I’m not to sure how to pack.

Something else strange – the quiet. One of the things I remember from when Bishnu left in 2008 is how crowded the house was with people on the last night: neighbors, uncles, relatives I’d never met before and have rarely seen since, they were all crowded on to two beds, talking and laughing. In most households, when a family member is going abroad – “outside,” is the word people use – there is a great deal of activity. But Aamaa’s house is not a usual household. There’s nobody else in it.

So as mid morning became afternoon, it was just us, wondering how to ready the house to be without its mother. I swept and Aamaa put the mattresses up. It was unclear what else to do; I just wanted it to look organized. Like we’d prepared something.

Sonom sir came down from the Resort. I’ve bought six packets of local tea that he grew in the resort gardens behind our house. I hang out at the Resort now and then, to jump rope or do qigong, to chat with Sonam sir and his wife and nephews. Many of my friends have stayed there over the years while visiting me. Sonam sir’s family is from Solukhumbu, and like me, they are outsiders who have their custom-made place in Kaskikot.

“Good journey,” Sonam sir said, giving Aamaa and I each a kata in the Sherpa tradition. 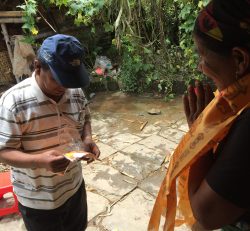 Throughout the prior evening and afternoon, there was one person who spent a good amount of time sitting with us: BAA!, Mahendra’s father. Our cranky, sarcastic, exhausted neighbor, the one whose missing teeth prompted my career in delivering rural dentistry to underserved people. From the time I first came to Kaskikot, BAA! seemed unapologetically resentful of my unearned privilege in the world. He and Saano didi’s husband often function as the men in our house, chopping branches or negotiating social matters that require representation by men. Over the years I’ve spent a lot of time with BAA! collecting branches or chasing the 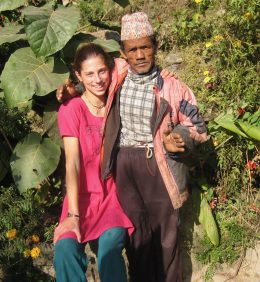 chicken while he watched me fumble or drinking tea and admitting that I don’t have any explanation for why the world is crap. That God gave me easy and he got dealt hard was never to be smoothed over or ignored. On some unspoken level, it wasn’t my fault, but I didn’t deserve any credit for being ahead, either. So we just collect branches and sip tea and that’s how it is. I took to calling him BAA! because he would point at himself and say, kind of demandingly, BAA!  Father. That’s how I was to address him, even though Bishnu and Didi call him “dai” or brother. At least he would be in charge of that.

Often our closest neighbors simply wander off when I’m leaving Kaski, as goodbyes are uncomfortable and pretty pointless, anyway, and at some point in the afternoon BAA! had indeed wandered off, and that was that. So I was surprised when he reappeared holding two silky white katas. He gave one to each of us.   BAA! will probably never see America, or probably anywhere outside Nepal. All the tourists come and go from this village and he is getting old with fewer and fewer teeth that I could not save, either.

After we’d done whatever we could think of to do, Aamaa changed in to the clothes that she’d hung outside in the shed the night before. Once her travel clothes were on, she couldn’t go back inside.  It’s also inauspicious to leave the house for a long journey in threes, so Aamaa left first, her bag packed with cucumbers and ghee and the CDMA phone for Didi and almost nothing to take America. In one of the strangest moments of my adulthood, Aamaa walked out of the yard and around the garden of cut corn stalks while I stood on the porch with Pascal, watching her go.

Then Pascal took a key out from around his neck and jammed it in to the wooden door. With that, he and I followed Aamaa up the little path, to the road, to the bus that will take us to the other side of the world.

2 thoughts on “Keys and Threes”