Last night in Tripureswor, Anne and Dilmaya and I slept in a makeshift tin cottage with the sound of the river rushing by outside. When we got up in the morning, we were astonished to find that the shelter was buttressed up against this stunning prayer site.

It is hard to capture the beauty of this place in a photo: river-worn, looping rock formations swirling around the base of this strong and humble tree. It is maintained daily and with great joy by our host, Krishna Man Shrestha, known by everyone here as Saila Dai.

He took us in to this wonderful garden and proudly went around showing Anne and I where each of the Gods sleeps in it. Below is the bed for Shiva, king of the Hindu gods. I missed a brilliant moment where Saila Dai lay down in this nook in his shorts and Nepali hat with a blissful smile, eyes closed, hands clasped in a Namaste over his head, to demonstrate how Shiva sleeps here.

Yesterday, as soon as we met Anne and crammed in to a hot bus with tiny seats to drive to Dhading, I told her about my friend Mary, who died a week ago. I’ve been missing her terribly and I feel myself trying to sort out where she is in this strange journey I am on in post-earthquake Nepal. Even today, I’m not sure why we’re headed out to Dhading. Because Anne is an expert on ritual, I knew she’d have some ideas of ways we could connect with Mary on our impending adventure in Tripureswor. While we bounced along in the bus, Anne told me about the Buddhist ritual of cultivating and offering merit to a departed soul, to help them along on their transition from this world to the next. I knew that was the perfect thing to take with me into our undiscovered story in Ward #6.

So Saila Dai’s gorgeous prayer site was an auspicious beginning to our day. After tea, we left with Bishnu to explore his village. I brought along my recorder and camera. With no clear plan and full day from Pokhara, it is safe to say we were winging it.

What we ended up doing was sitting down at house after house talking with the owners. We asked about their families and where they were when the earthquake hit; how they’d rebuilt and what they thought the future held. When asked what we were doing there, we were honest: we said we weren’t sure. We admitted don’t have the capability to do a complicated or expensive project so far from our base in Pokhara, but we were interested in understanding what people are experiencing in Tripureswor.

To our great surprise, person after person told us that we were doing a great service by taking time to talk with them. One person said, “by coming here and looking us in the eye.” Anne and I were both amazed by how many people said things like this. People’s lives are pretty shaken up in Tripureswor. But of course, it’s not just the talking, it’s the sitting, the cup of tea or slice of cucumber, the story of the prized son who is studying college in Kathmandu, the unwritten story of getting old in this place. It’s the lack of an agenda. That’s how most of the things that have mattered in the end have started for me in Nepal.

And then there was the water. The main focus of the iNGO community right now is shelter, but no matter who we asked, everybody told us that the biggest problem in Ward #6 is water. The earthquake damaged the water tank that supplies this whole ward, so they’ve been piping water in from neighboring wards, but that sharing won’t last. And even so, people have to walk very long distances to fetch water. Having done plenty of that myself, I can tell you it’s no picnic. The community has already located a new spring, and all that’s needed is infrastructure to collect and distribute. But in addition to some simple concrete tanks and many kilometers of pipe that they need – which is something we could provide – there are some complicated engineering factors, one of which is that the water source is on the other side of the river, so pipes need to be slung across it like electric wires.

Ward #6’s water pipes will have to be slung over this river.

As the day went on, it became clear that the water project also is too complicated for us. However, Dilmaya and I did feel like we’re capable of advocating for it. I can contact Oxfam, the major iNGO doing recovery this village, and my contacts at United Mission to Nepal, who are also involved with relief in Dhading district. We decided that Anne would stay for the week and help get together enough details for a proper proposal. Late in the afternoon, we all went in to town to meet with the Village Chairman and run this all by him.

The last thing to come out of our day was that Anne, who’s spent many years doing cultural and sociological research in Nepal, came up with a beautiful project for her upcoming week. There is a Japanese tradition whereby people write 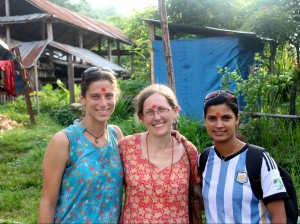 prayers or wishes on small pieces of paper, tie them to strings, and then hang the strings in the air, sort of like prayer flags. She plans to have tea with all sixty families in Ward #6, look people in the eye, and write their worries and prayers with them. She bought the paper and string while we were in town meeting the chairman.

I also did a lot of recording and hope to produce an audio slideshow about Tripureswor, as well as a radio story about the effect of the earthquake on animals. So if that works out, I’ll have a concrete reason to point to that we schlepped – and I mean SCHLEPPED – all the way out to this village. And if the water project actually comes around, that will be really amazing.

But on some level, I understand that this expedition was not about something concrete anyway.

Late in the evening, I went up to a high hill behind the house, overlooking the valley and emerald hills that are glistening with humidity and rain. I did my qigong practice and offered the merit of our day to Mary, to guide her on her way. I offered the merit of Saila Dai and the humility and joy he gives to his enchanted prayer site, and which he had in turn offered freely to us. I offered the merit of looking people in the eye, of meeting Janet for twenty minutes in a coffee shop and connecting her good heart to mine and following the road out to Tripureswor Ward #6, with no agenda but to listen to stories and return them to Janet, whom I don’t know at all. I got started late, so by the time I was finished with my practice, it was nighttime on the unlit hill, nothing but moonlight reflecting off the river in the valley and the spare lights of the bazaar down below. Which seemed right. The merit of stories is how they linger past sunset, into the darkness, when all the people have gone to bed. 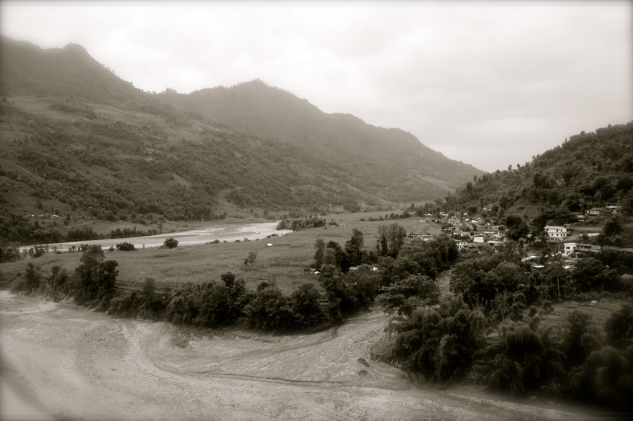