I woke up tired today. Partly because I stayed up so late writing, and partly because we’re all sleeping on the floor of the living room by the front door.

But I had an interesting morning. I made my way to an outdoor lot full of incomprehensible discarded piles of things, where Dr. Kiran’s group, SXJ-95, was meeting about their transitional housing unit, a clean white bubble sitting in the middle of the mess. It was really fascinating to hear how they’d developed this design by researching other units, most notably the post-earthquake shelters used in Pakistan. I’m going to save the details, because I hope to produce a quick audio slideshow about it. 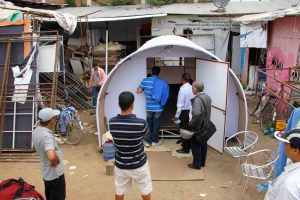 While I was there watching, two government officials came to inspect the prototype, and discuss minor modifications so that it could be used to replace a destroyed Health Post in rural Lalitpur. By the time we left, the builders were getting back to work on the second unit, with a plan to drive the pieces to Lalitpur and set up a shelter within two days.

This has really got me thinking about transitional housing as a possible use for our relief fund. I plan to either donate it to a group doing really valuable work in rural areas, or finding a project that we can do well. It has been such a chore to procure and deliver tents – which are getting more and more expensive – and it’s frustrating to know that, while obviously better for people than no tent, this is such a short-term improvement. Plus, each time a transitional shelter is placed in the field, it’s an opportunity to get feedback and improve the design, so if we can collaborate with a group like Kiran’s, perhaps we could contribute to the larger good in terms of research and design.

SXJ 95’s unit costs about $500, but they put a lot of thought in to user feel and aesthetics. On one hand, this means we could potentially offer rural families upgraded transitional housing; on the other, we couldn’t afford very many. I plan to keep in touch with Kiran about their test in Lalitpur and maybe see if this design could be used for another health post or school classroom. Here’s a recent article by Gordon Brown, former Prime Minister of the UK, on the importance of reinstating schooling for basic child safety and welfare (sorry for the sensationalist title).

I left the crazy stuff lot with its shelter bubble, and my next stop was the Ministry of Health and Population. The World Health Organization holds bi-weekly meetings in collaboration with the Nepali government, where all of the major players in town for recovery – large iNGOs, foreign medical teams, etc. – come to share information. These meetings are divided in to clusters, such as Health, Communications, Shelter, Security etc. I went to the Health Cluster meeting.

This is the opposite end of the spectrum from the WHR’s and SXJ-95’s of the relief effort. Kiran dropped me off, and I hopped out of his car into a parking lot full of oversized, logo’ed SUVs. I made my way to a packed meeting hall – probably close to 100 people of various nationalities. I sat in the back of the room and scanned the emblazoned vests in front of me: World Vision, Save the Children, AmeriCares, International Medical Corps. Japan, Switzerland, Canada…and then in the back, some straggling foreigners like me, probably there to get the lay of the land. 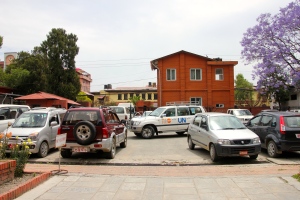 The meeting was led by the WHO rep to Nepal, Dr. Lin Aung, with government representatives in attendance. I had missed the first 20 minutes or so, but listened to some updated figures, and then attendees were invited to share what they’d been doing. That part seemed a little odd. They would announce the name of an area – “Sindhupalchowk?” and then various groups would stand up and say what they had been doing in Sindhupalchowk since the last meeting. It was more information-sharing than strategizing – but maybe these groups have other methods that they are using for truly coordinating their efforts.

After the meeting, I went to go talk to Dr. Aung. Ironically, I was trying to meet him all winter because I thought he’d be a good person to know for Kaski Oral Health, and I was never able to get in touch since I’m rarely in Kathmandu. But when I introduced myself, he turned out to be a very friendly and genuine guy. He gave me five minutes of undivided attention, even though another half dozen people were waiting to talk with him.

I asked what he thought a small organization like mine in Pokhara could do to pitch in to the relief effort. Like others, he said we should be thinking medium and long-term, which is where multilateral agencies aren’t nearly as agile or embedded. He said that with our community ties, we should focus on counseling and psycho-emotional support.

I said, “We don’t know anything about post-disaster counseling.”

He said that the psycho-social cluster is developing protocols for this kind of thing and gave me an email address where I could access this info.

All of which tells me that, for better or worse, coordination is almost completely at the discretion of aid providers. I think – and you could argue that this makes sense under the circumstances –things are really set up such that, in order to find the best way to participate, organizations large and small have to make a point of reaching out.

I’m not sure why I’m a little hung up on this. But I suppose we’d like to think in a humanitarian crisis of this nature, somebody has the answers and can tell us all what to do – and maybe somebody should know. But the basic fact remains that everybody is winging it to some degree, and I can’t argue this is exactly anyone’s fault. It seems like it’s really one of the cruelties of the whole situation.  The real blame lies in the injustices of the past that led to poverty and bad planning and lack of security, not in the present where nature took over. In any case, it seems like coordinated strategic planning is largely a matter of self-discipline.

Before I left for Pokhara, I went to visit a friend who is the CEO of Teach for Nepal. Most of their teaching fellows were there for a day of counseling with social workers from Israel, experienced at working with disaster trauma. I learned that one of TFN’s young teachers perished in Sindhupalchowk. The day of the earthquake, my friend and her husband were unable to call a helicopter to Sindhupalchowk, so they drove 5 hours to get there and dig through rubble themselves.  It was out there that they realized they’d actually lost her.  Now they are left with continued aftershocks and their other 89 fellows to send back out to their schools.

By the time I got on the plane to Pokhara I admit I felt pretty down. I had also spoken with my friend’s husband who has worked on a shelter that costs just $100 and might be a good option – we could potentially provide an entire community of about 100 -200 families with safer housing while they rebuild. But everyone is so hurt, psychologically and otherwise. The scale of rebuilding that’s needed is really hard for me to wrap my head around. I really just wanted all of it to go away.

At the airport in Pokhara, Prem was waiting for me. And as we crossed the road, Aidan was on the other side sticking his head out the taxi window, shiny as a stamp, his cheeky toothless grin lighting up the whole city. Pascal insisted on sitting in my lap for the seven-minute car ride. I gave them some super-sized squirt guns and unloaded the rest of a bag of Reese’s Pieces.

We went out into the late afternoon Pokhara sun, and walked to a plot of land up on a hill, where leveling strings are stretched across deep foundation holes in the ground. Prem and Didi are building their first house. 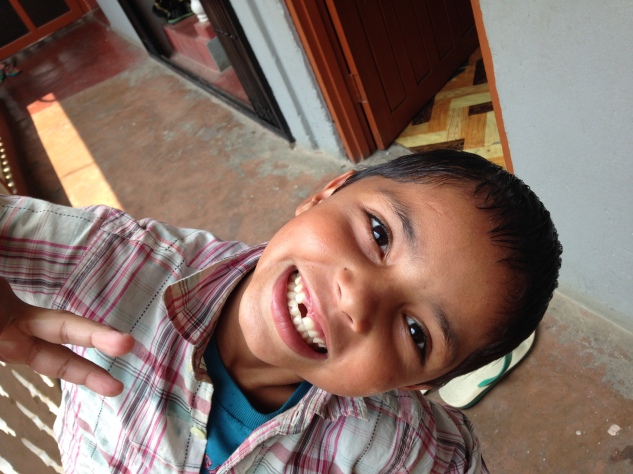 Teach for Nepal is providing relief in their working areas, and will have a special focus on rebuilding schools. You can support them at http://nepalrelief.teachfornepal.org.