The first part of the group left for Archalbot on Thursday: Robin and Colin, the French volunteers, and our field officer Dilmaya. I came a day later because I was working on 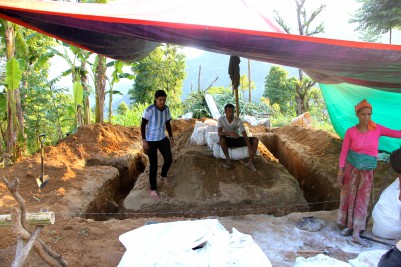 getting our new office set up. Actually I was busy repainting it with the wrong type of paint, so before I left for Archalbot on Friday, I had to call a painter to redo my redo.

On Friday I rode out to Bote Orar, where the road to Archalbot turns off the main highway between Dhumre and Besisahar. When I arrived at about 5pm, the earth bag house already had a one-meter deep rectangular foundation.  Not bad for one day’s work.

As dusk fell, Dilmaya and I accompanied some of the young men to a clearing on the edge of a terraced field for a community meeting. We sat across from the tarp-shelter in the field.

We’d explained the plan to our local organizers, Kripa and his cousin Surya: anyone who builds a shelter gets a tin roof from us; the earth bag house is a sample building style and we can provide materials if anyone else wants to do it; the family in the field will be a sample building project where the community works together build a bamboo house in a day. Kripa and Surya were getting a lot of questions about who would get tin for what, and they wanted to gather their neighbors and discuss this plan in front of us, to protect themselves from future accusations of greed or favoritism.

With night falling around us, the discussion that unfolded was amazing. It basically boiled down to: “This organization is here to give us tin roofs for completed shelters. How are we going to help each other complete shelters?” They discussed the order of priority in the village – everybody agreed that the tarp family in the field was the top priority – and other matters such as where and how to get enough bamboo. Even the tarp family made their way over to the meeting, but they seemed guarded, unsure whether to believe us and everybody else. It was their neighbors who explained the plan and assured them they needed to start collecting bamboo.

People kept turning to us and saying, “How many houses are you going to build? Tell us and we’ll figure out who should get them.” And Dilmaya and I kept saying, “You tell us how many houses you’re going to build, and we’ll bring one bundle of tin per family. If we have the problem of too many people building, we’ll deal with it later. That’s never happened.”

Dilmaya did a great job of continually redirecting the discussion back to that point, that everything depended on their planning, and we’re there to meet them wherever they can get to. One guy asked if large families would be able to get more than one bundle of tin. We replied that’s not up to us; our allotment is one bundle of tin per family, and people can add more area with re-used tin or natural materials. “On the other hand,” we said, “as a community, if you guys tell us that a certain household really needs more tin than that, we’ll believe you.”  Because nobody’s going to be the jerk who tries to make off with unneeded extra tin under the scrutiny of the entire village.

There are still many of steps between this meeting and a rebuilt bamboo village in time for monsoon. But I’ve been doing community work in rural Nepal for nearly a decade, and this was as good as it gets at this stage. What you hope is that your attention will mobilize existing capacity and snowball in to a collaboration that combines the best of what we have with the best of what local people have. When we can frame our “aid” as an incentive, even though we want to give it away, people start to ask each other, How are we as a community going to capture the possibility of tin?  Our responsibility is to maintain a consistent and intelligent presence, to keep redirecting ownership back to the community, to closely monitor to make sure nobody’s taking advantage, and to live up to our word. We bring in a small quantity of crucial expertise in building, plus the final critical hardware: a new roof.

There’s also the simple value of spending time with people.  When we arrived, the corn field that needed to be cut down to make the earth bag house was still standing, and the family slashed it in half an hour–but

they weren’t going to do that until they saw us standing there for real.  Kushal, the twelve year old boy we met during our assessment, called me almost every morning between Monday and Thursday, and he never had anything to say. He just wanted to see if I’d pick up.  Millions of rural poor go unseen by the world unless they are in the midst of a thrilling crisis that offers the chance for airdrops, mass collection of first aid materials, teeth-clenching field medicine, and smoky photos of catastrophe. But the persistent plight of invisibility and systemic disenfranchisement is too complicated and time consuming for most of the world to attend to by looking people in the eye.  It’s not the habit of our global society, of our governments or social organizations, to sit down in a clearing and say, “We’ll stay here and work on this with you. What do you think?”

I understand why large aid agencies can’t work like this. It’s not their job. They have the budget and infrastructure to strategize to best possible average and cast a wide net; their purpose is to get to the highest number of people, not to reduce the amount of waste or increase the amount of human connection. And Nepal needs them.  An organization like ours could never hope to reach any reasonable fraction of those in urgent need using our approach. But I’m reminded how much groups like us matter, even in the face of a gigantic task like building half a million houses in a few weeks. Because the best possible average still leaves out a lot of people, and for each one of those people, their house is 100% of the problem.

This strategy doesn’t always work, and I don’t know how things will turn out in Archalbot, although I admit I have a good feeling about it. But the hardest part is that you have to be willing to walk away if the community can’t carry its weight, and that’s devastating when it happens, because you and your team have put your heart in to it. You sit in the grass with people while they work things out. You tell them you are there for them and that you respect the wisdom they bring to the process as well as the result. When it falls through, it doesn’t just hurt your budget, it hurts your sense of hope and capability. It’s not something you write up in a report and send up the chain to management. You just go home and cry.

But what am I talking about?  Here’s to you, Archalbot.  We’ll stick it out for better or worse.  Show us how it’s done. 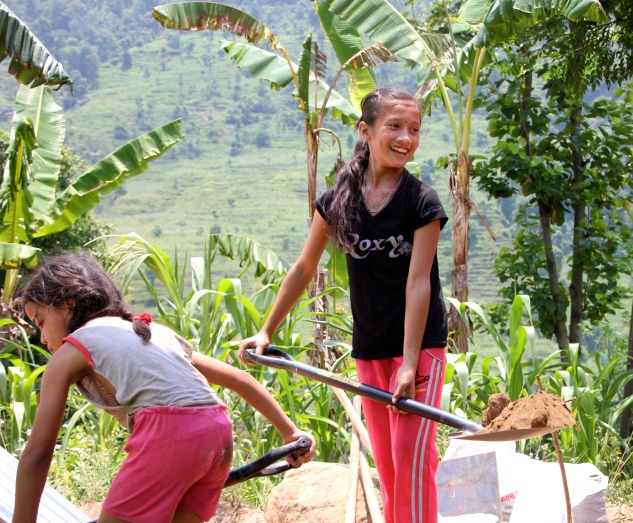 One thought on “Possibility of Tin”