It sure is hot, I’ll tell you that much. No matter how much water we’re drinking, it just seems to turn directly in to sweat. I’m thirsty all the time.

It took me about two hours to walk from Archalbot to the next village over, Bharte. But it was two hours in the direction away from accessible travel. Bharte is next to Archalbot on the map, but once you get a little way in, it’s pretty far from anything. Instead of the clustered communities I’m used to in Nepal’s hills, Barte’s houses are often a few hundred meters apart.

It took me about an hour and a half to get to Barte from Archalbot this morning. I met up with a guy named

Pashupathi, president of Nepal’s Red Cross Chapter in Bharte. The first place we stopped was at a collection of households sharing a tarp in the yard.

We sat down and discussed the plan: we’ll provide one roof per family if they build walls. Each time we have this first conversation, it has a different feeling. Some people seem over-eager to get what they can whether they need it or not; some proud and cautious. We’ve even been some places where homeowners didn’t seem to see the point of what we were proposing—as if the entire situation seemed too overwhelming or pointless to try to break into. In Sirewari there was a friendly, open vibe, and people caught on right away. I took down the number of the person who seemed like my best contact, a young mother named Santa.

Next we went around back and visited the home a woman who unlocked the door of her boarded up house. I peered inside, where the orange tarp over a hole in the roof cast a firey glow onto the wooden staircase and various items and broken wood stowed in what used to be her living space. The scene looked ominously like those iconic photos of ground zero, leaving me momentarily mesmerized. 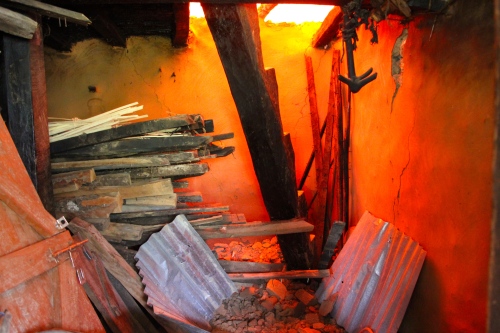 From there Pashupathi took me on a very long climb. It took us about an hour winding up quiet hillside paths to reach a soaring ridgetop in Lakhure. It looked like you could roll off either side of the hill and land all the way back in the valley. Summer clouds have obscured the piercing Annapurna peaks that would break the horizon in winter, but and endless fall of terraced fields across the valley are in full green bloom, spilling down from the sky in a dizzying cascade.

I went to four houses along this ridge in Lakhure, all of which were leveled in the earthquake, all of which belong to Dalit (“low caste”) families. This was my first visit to a place where houses where actually completely demolished. And what to you know – all four families had rebuilt themselves shelters, which they’d covered with traditional grass and reused tin. Most were using their tarps on top of these completed shelters to keep water off the fragile roofs.

We spent some time talking with Bal Kumari, a widow – read, highly marginalized in rural Nepal – whose two daughters are married and whose two sons are still in school. She hired people to rebuild her fully leveled house in about 10 days. They literally took the stones of the rubble and put them back in to a house. Which, admittedly, used to be two levels, and is now it is one. But it’s a sturdy, warm, normal house. With old tin and a tarp on top (we will be bringing her new tin shortly). She still doesn’t know how she’ll repay the $300 debt this put her in to.

Other members of this community had cut and woven bamboo, or spent hours collecting and bundling grass for their roofs. I know the pundits talk about the resilience of the Nepali people so much it is becoming a cliché. But it is very moving to see this courage and persistence concretely, as stones and walls and laboriously crafted grass roofing.  The only aid they’ve received here is some rice, oil, salt, and tarps.

We’ll be bringing tin up to Lakure next week, and in the mean time, I hope we can find a way to employ a few of the people from these houses as day-laborers to help rebuild elsewhere in their community. They’ve certainly proven they know more than I do about it. 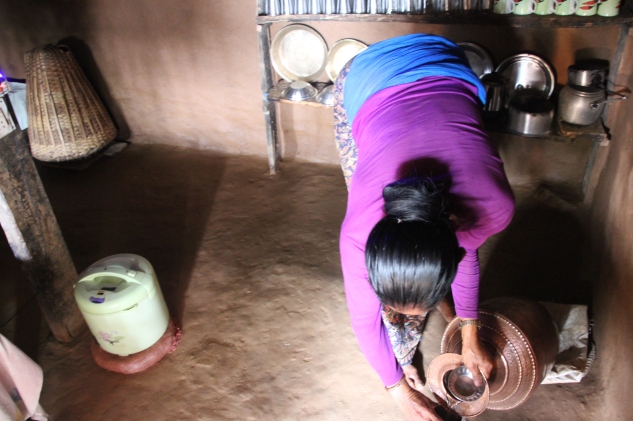 Bal Kumari Bhujel inside her house, which was leveled in the earthquake. She hired help on credit and rebuilt it herself.