When I was at the Sindure dental clinic a few days ago, a 60-year-old woman I’ll call Mina arrived with three family members.  The family had walked an hour and a half from the next ward over because, after trying shamanism and home remedies for Mina’s dental pain, and they heard about Sindure’s dental clinic from neighbors.  All four of them wanted to be seen. 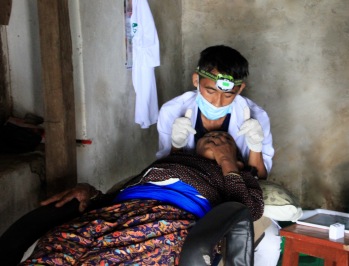 Sindure is our remotest clinic. The clinic assistant Biju has to walk about a quarter mile to fill a bucket of water at public tap for use inside the clinic. When our technician Jagat examined Mina, he found that she needed two teeth extracted but also that she had low blood pressure. A discussion ensued: given Mina’s age, medical history, and low blood pressure, should Jagat perform the extraction? Our office staff had taken a five-hour bumpy private jeep ride to get to Sindure. In the monsoon, it would take this family the better part of a day on public transportation to reach a hospital, where, possibly, the dentist would or wouldn’t be in.  They might or might not be able to return home the same day. The hospital might or might not perform an extraction on a patient with low blood pressure.  In the best case scenario, the cost of transporting the whole family, paying for treatment, and maybe overnighting in the city would be significant.

In the end, Jagat treated Mina with silver diamine fluoride, a noninvasive carries-arrest technique that turns decay black and hard, safely slowing and often halting the disease.  He advised her to return the following week, and if her blood pressure looked better then, he would extract the two teeth. The treatment cost her sixty cents. In all except one or two of Nepal’s hospitals, silver diamine fluoride is not in practice, although in the U.S. it has now been approved by the F.D.A. 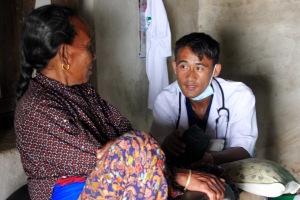 Later, we posted the case to our private JOHC clinical page, where all of the rural technicians can discuss case questions with Dr. Bethy and Dr. Keri. What blood pressure is too low?  Does the patient’s age matter?  How do we factor that realistically Mina is extremely unlikely to seek urban care even if we refer her?  What role does patient counseling play?  What other things determine whether such a patient can safely have an extraction done in a rural dental clinic, and how do we progressively bring different levels of care together over time?

What about the grandchild who was with Mina, probably not more than eight, whose access to a hospital is burdensome enough that it only makes sense to go there for emergencies, not simple procedures like silver diamine fluoride or glass ionomer fillings? Why should an eight-year old have to let a disease progress until it’s an expensive emergency in order to be worth caring for, when early intervention can be made accessible?

Mina’s situation is an excellent example of why we are trying to get the national health care system in Nepal to adopt primary dental care in rural health posts and school brushing programs in the education system. It seems kind of obvious, but in fact our approach is very uncommon, even outside of oral health (where there is literally nobody working on a systemic innovation in Nepal).  The majority of rural public health programs we see either focus on a single, one-off hospital with unique resources, or try to please donors by scaling up over whole districts at the expense of rigorously exploring single instances of a model.  By contrast, we’ve added a few rural dental clinics each year and iteratively improved the design and process of creating-community based oral health care. Now we have a strong if imperfect proof of concept to present to policy makers. We think that what we’ve done in eight places like Sindure could be done in all 3500 of Nepal’s health posts, bringing sustainable primary dental care to about 20 million people.

Anita working at her clinic in Katuwachaupari, Parbat

It was last summer in 2016 that we first presented this model to national level policymakers, and our slides immediately struck a hot wire.  The reason is that, although you never knew it, dentistry is an amazingly political topic. This is true even in the U.S., where there’s been a movement to create dental therapists who can provide a limited scope of practice in remote and underserved areas where doctors with $600,000 in student loans will never set up clinics. But who poses the most forceful opposition to dental therapists? Dentists.

Dentists are not the only professionals to oppose what is perceived as the degradation of their trade by mid-level providers with less training, but they are particularly energetic about their turf.  I recently read a Washington Post article that compared the dental lobby in the United States to the gun lobby.  The disagreement is framed as protecting the poor from low-quality treatment, but in practice, the position protects the wealthy from competing investment in

effective treatments that could reach people without the ability to pay.  There are a good number of such treatments that have been well-studied and do not require pricey providers with PhDs to administer them.

In dentistry the problem is made even worse by the discipline’s roots as a cosmetic discipline.  Dentists used to be barbers!  Even now, the field is separated from the rest of medicine, with dental students educated outside of medical school. If you’re American, dental insurance is probably an appendage on your main health coverage. Even though medical science has long since understood the importance of oral health in overall health, dentistry remains siloed in its own world with its own rules. Therefore, it is also elitist – yes, I said elitist – because as “bonus” medicine, only those who can afford it get it.

The road back from Sindure…not so easy, even in our jeep!

We’re facing the same situation in Nepal, but the ratios are vastly different. Here, about 80% of the population lacks access to oral health care, and oral disease is one of the most widespread health problems in the country. Dental clinics are exclusively in urban areas, and mostly in the capital, but the majority of the public is dispersed across remote hills. With bazillions of dollars going in to nutrition, maternal health programs, cardiac care and diabetes, all of which are directly related to oral disease, there are almost zero dollars being spent on oral health care…because, even in the year 2017, it is still widely viewed as a cosmetic issue.

Like American dental therapists, our dental technicians provide appropriate, high quality basic dental care in rural areas, but in Nepal that’s almost everywhere.  They also refer to secondary level care, providing an access pathway for people like Mina who, without at least getting a local referral first, would be extremely unlikely to take herself to an urban center for dental medicine.  But when we go to policy makers to promote this model, the dental lobby counters with concerns that dental technicians are poorly trained and won’t stay within their scope of practice.  Which is a real concern when there is no regulation, but is not what our evaluation last winter showed when technicians practice within the structure we’ve created.

Yesterday, Aug 2017, was our second central level advocacy meeting.  This year we were joined by two of our dental technicians, K.P. and Anita, who both work in clinics that received local government funding this year.  They’ve treated thousands of people in their villages.  We were prepared for some heated debate…recently, the Nepal Dental Association shut down a government training in the Basic Package of Oral Care that provides the basis for the work our technicians do.  The topic is currently so frantic that nobody from the government attended our advocacy workshop! So it was just us, some open-minded dental professionals and social workers, and a very strongly opposed contingent of the NDA.

The first two hours of the workshop were very polite.  K.P. and Anita each spoke about their experiences – for example, Anita’s clinic runs on Mondays, and she told a story of an elderly man calling her on a Tuesday asking how he’d make it a week. So she knowledgably instructed him to pick up two medications at the Health Post, and the following Monday extracted the tooth to his great relief.

The push back started cordially, and then came a torrent. “Little knowledge is a dangerous thing,” one young dentist pointed out, telling a story of a minimally-trained provider he had once observed performing a procedure incorrectly. The discussion period morphed into a rapid-fire series of dissenting speeches framed as questions:

How are these “technicians” selected?

You know they will only work for your organization for a while, and then they will leave and go open illegal dental practices.

Why do you call them technicians? Technicians are people who fix chairs.

One time, I saw a patient with an extracted tooth who turned out to have cancer. What if it’s cancer?

Dental students all do internships. We can staff rural dental clinics with interns on temporary rotations.

You’ve spent all this money over the years. Why didn’t you put that money in to setting up one proper referral center with equipment? The dentists will come to it, if you place the setup there.

Somewhere in this deluge of critical questions a most interesting declaration fell out of the sky:

Our health care system is not a playground!

This criticism was aimed at our technicians, and these are all objections we’ve heard before, and we expected them. They frame a convenient, self-referencing argument:

The exclusion of poor people from health care is for their own protection from under-trained hacks.

I was given “three minutes” to respond to a barrage of about forty questions.  Mina crossed my mind, and all I could think of was, our health care system is not a playground.

Indeed.  While we are all here navel gazing, real people are needlessly suffering.  There is a big difference between visiting a place for a day, I pointed out, and sleeping next to someone suffering from pain and fever with an infection, a day’s bus ride from the nearest badly-regulated public hospital that may or may not have a doctor who can treat the problem.

What about the use of resources to build sustainable providers instead of randomly placed dental clinics for imaginary doctors to flock to?  If only there weren’t so many rusting supplies sitting in rural places, waiting for people to come use them.  If only the professional medical lobby put the same effort in to supporting, monitoring, regulating and creating referral systems with community-level providers as it is putting in to obstructing them.  Just think what we could have achieved by now.

Our health care system is not a playground.

Here’s the thing.  Nobody wants your interns, your mission camps, your adventure dental care trekking, your once-a-month community service, your charity. We want dignity. We want providers who are appropriately trained for their settings, who know their communities, who will answer phone calls on Tuesdays, who are there for the long haul and not as a resume builder on their way to something better. We want specialists and we want them in the entire country, for everybody, not in the one community where self-congratulating people established a referral center that, happily, expands their own reach. We want something that can actually be implemented, afforded by the government, where there will be a willing workforce, something that is sustainable.

Our health care system is not a playground.

No, it’s not.  Little knowledge is a dangerous thing.  Somebody answer to Mina.

4 thoughts on “Our Health Care is Not a Playground”