I am so excited about this post. I started hoping I’d get to write that title a few weeks ago, and now here it is.

We went back to Archalbot today to see how things had progressed since our tin delivery about a week ago. In contrast to our first shelter outreach effort, where we left not knowing how many heads we’d actually covered, in Archalbot we found a village of new bamboo houses. Some of them are still in progress, for a few reasons. One is that the houses in Archalbot didn’t fall completely; most people still have homes that are dangerous, but not technically unlivable, which slows down the shelter construction. The second is that it’s planting season, so people kind of got something up as quick as they could, and plan to do their plastering and finishing in about a month.

Still…this was a pretty great sight to see. Let’s start with the earthbag house. It’s been covered in a bamboo frame and turned in to a pretty sweet little cottage with electricity and everything hooked up, and a neighboring home built right next to it, much like the attached houses they are temporarily replacing.

Next up, remember Kushal? Here is a photo from the tour he gave me of his original house, and here he is in his new bamboo home.

The site we glamped at in Kripa’s yard, which was previously the buffalo shed, is now a bamboo outdoor hotel (which unfortunately, I seem not to have taken photo of!) And this lady, Kripa’s neighbor, was seriously so happy about her bamboo cabin that she absolutely insisted we come back again after the planting season, when it’s all plastered and everything, to stay the night. 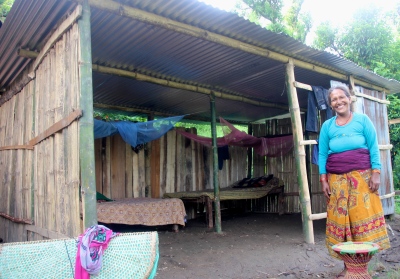 I could post another load of these photos. They were just great, one after another.

For the sake of transparency, I should admit that there was one woman who hadn’t built a thing; her tin was sitting on the buffalo shed waiting to be used. In the end, we didn’t pre-check all the frames or original houses in Archalbot, because we’d spent so much time there and the homes were so concentrated that we relied on the community to police itself (and in fact, it was a neighbor who brought us over there). This house is one of those that is ambigiously unsafe; cracks in the walls, but generally a more appealing place to live than a temporary house, so it’s kind of up to the owner whether or when they’re going to bit the bullet, move out, and rebuild.

We had an awkward interaction where I politely explained that she didn’t really need a roof – which I could see from looking in her house – so we’d be giving it to another family in the morning. I said we’d welcome do our best to provide anything else she could think of for something she actually needed. That was at 7:30pm. When we came to pick up the tin the next morning at 9:30am, we found the following:

Well, that worked. For something.

So we have the successful, the more successful than we actually we wanted…and Uttam. Of all the houses in Archalbot, Uttam’s family’s are my favorite. Unfortunately they’re on borrowed land and in the last week and a half, the landowner said they can’t stay, so in theory they’re going to have to relocate this whole operation to their own land, where their ruined house is still taking up a lot of space. As a result they didn’t bother building the front wall. But I still give this house an A- overall, and an A+ for improvement from starting point.

However the trophy goes to Uttam’s older brother, whose home is quite smaller. Remember when I this family didn’t want to go cut bamboo because they said nobody would help them? When Uttam’s older brother and his wife left for the woods with their tape measure, and when he showed me where he’d planned the guest area? This guy and his wife looked so proud of their house and so grateful that something in this world hadn’t proved to be a sham.

When I took this photo of Uttam’s brother outside his house with his grandson, he called me over and pointed to the camera, and I knew he was going to say what people always say: “Please send me a copy of this picture.”

But he wanted something else.

“Show this photo to the world, ok?” he said. ”You know, something for people out there to remember me by.”